Wandile Gwavu, coach of the Lions

Imperial Lions coach Wandile Gwavu concedes that his defending champions have not made an ideal start to the 4-Day Domestic Series but believes they will improve when they take on a VKB Knights team he believes ‘is playing the best cricket in the country’ from Monday.

The two clash at the Imperial Wanderers Stadium in Johannesburg where the hosts will seeking a first win and the visitors bidding to make it three wins from three to start the 2020/21 campaign.

“It’s not the start we were looking for, but nothing has changed as we try to turn things around,” Gwavu said ahead of the game. “We had a good week of training this week and we also had some good discussions with the players.

“The energy at training and in the dressing room is very positive. There are a few aspects that we really want to improve on. We saw some of those improvements in the Cobras game, unfortunately we just couldn’t get over the line there.

“We’re still in a good space and we’re confident of putting up an improved performances going forward.”

The Lions, who have won the title for the last two seasons, were beaten heavily by the Hollywoodbets Dolphins in round one, before being held to a draw by the Six Gun Grill Cobras in a round two encounter they had dominated.

Now in round three, the coach knows there is little room for error.

“We have to respect the Knights because of the good cricket they’ve played, probably the best in the country so far,” Gwavu said. “They’ve made an excellent start, but we’re at home and hopefully that factor will work in our favour.”

The Lions have lost a huge chunk of their squad to the national team, but the coach is confident in their depth.

“We’re losing eight players from this round,” Gwavu adds. “We always lose players, this year is obviously a bit more because of the extended squad the Proteas have named. It’s a great thing when your players are called up.

“But we have a lot of depth and if you look at the last few years, whenever we lose players, those who come in always step up and I’m looking forward to see how they respond for us.”

Meanwhile, Knights coach Allan Donald could not have asked for a better start to his career in Bloemfontein. They crushed both the Warriors and Dolphins in their two matches thus far and the former Proteas paceman is delighted with the way things have begun.

“I think the headstart we had in the preseason was all worth it, all the long hours, the lonely days working one-on-one with players was a great investment,” he beamed. “Getting to know each individual better, their strengths and those sorts of things has made a huge difference.

“I’m just so pleased. We sat down and spoke at length about the art of Test cricket and the rhythms and intensities of Test cricket. I couldn’t be more pleased for the guys and the way they are playing.

“The competition this year is very tight, seven games and so you can’t afford any slip-ups…so the response we’ve had is magnificent. I just hope we can build on this.”

Looking ahead to the trip to Gauteng, Donald conceded they have to be prepared for a backlash from the hosts.

“We’re up against a Lions team that haven’t had the best of starts,” he concluded. “But they’re an outstanding team and I have no doubt they’ll come out swinging at one of my favourite grounds in the world.

“It is our first away game, but we’re really up for it.”

The match will be broadcast through a live stream via the DStv app or website, available to all DStv customers, on channel 245.

All matches in the 4-Day Domestic Series are also being covered via ball-by-ball commentary on the Cricket South Africa (CSA) website, www.cricket.co.za.

The Lions squad is: To be confirmed 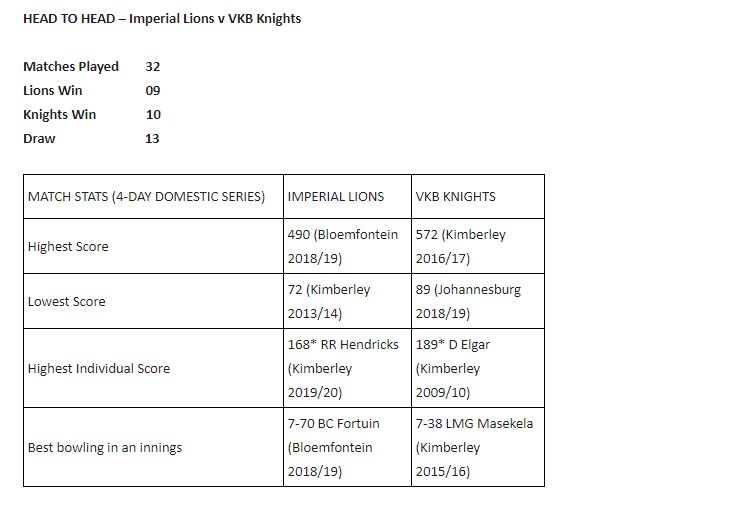