Hollywoodbets Dolphins assistant coach Mduduzi Mbatha has highlighted the importance of consistency as they prepare to welcome the Six Gun Grill Cape Cobras to Durban for round three of the 4-Day Domestic Series starting on Monday.

The hosts won their opening match of the first-class season emphatically against defending champions Imperial Lions at Hollywoodbets Kingsmead Stadium, but were then themselves thrashed by the VKB Knights when they travelled to Bloemfontein for round two.

Now back on their home turf, they are aiming for a return to winning ways against a visiting team that has failed to win a game so far in 2020/21.

“We had a brilliant start against the Lions where everything we wanted to improve on during the off season clicked into place nicely,” Mbatha stated. “But then all that went out of the window in the second game.

“I think we need to be more consistent when it comes to having the same hunger and desire. Unfortunately, when we got to Bloem we were really outplayed. We were just inconsistent about the way we executed, we started poorly and that lead to us struggling.

“I think we’ve had a good week now to reflect on that loss, the guys have chatted about it and I feel we in a good space heading into round three against the Cobras next week.”

There was no cricket this past week as the teams were given a break. It was a good time for the Cape side to regroup after they lost their opening match narrowly to the Momentum Multiply Titans and had to fight back to escape with a draw in round two against the Lions.

But with the next set of games likely to give the competition more shape, the Dolphins know that a good result on the east coast is key.

“In this competition, all teams have quality players so we can’t really say that because the Cobras haven’t started very well we’ll expect to win the game,” Mbatha added. “We’re definitely not thinking that way because we know they have really good players in their side who have the capability to turn it around.

“So we’ll start off fresh at nought for nought and will be looking to start on the front foot. But we are at hope and we need to capitalise on that because ultimately we want to turn Kingsmead into a fortress.”

Cobras coach Ashwell Prince, meanwhile, knows his side may have not made the brightest of starts, but he is also cognisant of the fact that his players have not played poorly either.

“Even though we don’t have the points on the board, the performances have been encouraging so we’re still in a good space,” he said. “We played really well and should have won the first game in all honesty, but let ourselves down on the final day.

“In Johannesburg last week we started the game poorly, but then came back really well to earn a credible draw. So I’m satisfied so far and we’re looking forward to the game against the Dolphins.”

All the teams this week will be without key players due to national call-ups as the Proteas prepare to face England in a limited-over series starting next week.

Prince believes he has prepared for that, adding: “It’s been a pre-season where we had to think outside the box, when I say think outside the box, we have had to include players from our senior provincial structures who could potentially come in to the Cobras when we get national call-ups or there are injuries throughout the season.

“We have three senior players who have been called into the Proteas squad for the upcoming England tour and due to it being played in a bio bubble, they’ve had to pick a larger-than-usual squad. We will definitely be looking at senior provincial players.” 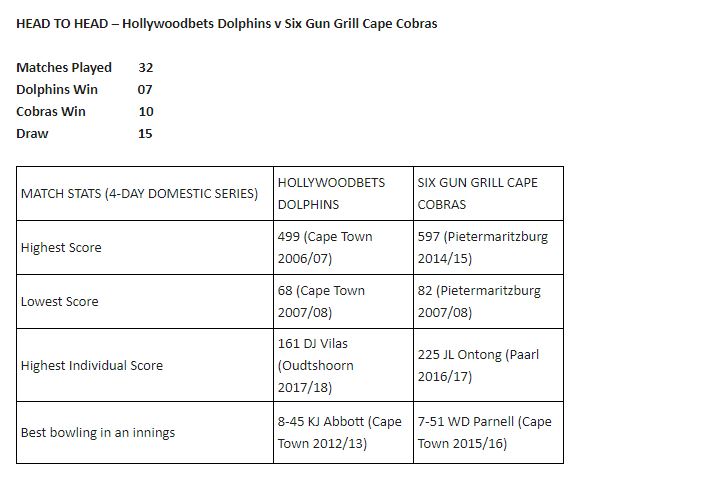