SuperSport, who own the rights to broadcast all cricket in South Africa, will provide supporters the opportunity to enjoy the red-ball action through multi-camera angles and commentary via the DStv app or website, available to all DStv customers, on channel 245.

Cricket is currently being played behind closed doors, and live streaming the series will enhance the match-day experience at home and bring fans one step closer to domestic cricket. Fans can also follow their franchise teams through a new-look match centre with ball-by-ball coverage on the official CSA website (cricket.co.za).

One match from each of the remaining rounds will be showcased, beginning with a Round 3 encounter between reigning champions Imperial Lions and the VKB Knights at the Imperial Wanderers, starting Monday 23 November. Broadcast will start from 09h55 daily.

The 4-Day Series has six competing teams divided into two pools of three teams each. They will play a double round of fixtures against teams in their own pool and a single round of cross-pool matches.  The top team from each of the pools will contest a five-day final.

After the opening two rounds, the Momentum Multiply Titans (A) and the VKB Knights (B) top their respective pools after registering back to back wins.

CSA Acting CEO Kugandrie Govender commented: “It has taken a lot of investment of many kinds from both CSA and SuperSport to make live streaming of the 4-Day Domestic Series a realisation. These investments have been taken with our fans in mind. They are the heart and soul of the game and we are truly delighted be able deliver first-class cricket to them through high-quality streaming.”

“Increasingly, sport broadcasters are embracing the streaming model, so to have domestic cricket on board is very exciting,” said Marc Jury, SuperSport’s head of marketing and acquisitions. “There is some great local talent out there and while we cannot have crowds, this allows fans to still watch the talent and enjoy the best of local match-ups.”

Imperial Lions CEO Jono Leaf-Wright added: “As the defending champions it is fantastic that our supporters and partners will be able to watch the Imperial Lions and other franchises compete in the 4-Day Domestic Series.

“It is an effort welcomed by the players, sponsors and all stakeholders of the cricketing eco system. The players are especially excited as they can now showcase their skill to a large audience especially since fans are not allowed at the stadium right now,” concluded Leaf-Wright.

Consumers in South Africa can subscribe to DStv directly through the website here or the DStv IOS and android app.

GROUP STANDINGS AFTER ROUND 2 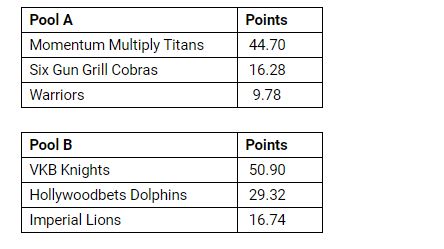