Rory Kleinveldt and team mates of the Cobras celebrate a wicket

A maiden career five-wicket haul by veteran Rory Kleinveldt laid the platform for the World Sports Betting Cape Cobras to secure their place in the Momentum One-Day Cup semi-finals thanks to a comfortable seven-wicket win over the VKB Knights in Cape Town on Thursday.

The 36-year-old seamer claimed an impressive five for 22 to help shoot out the visitors for 186 at PPC Newlands, before Zubayr Hamza’s unbeaten 65 (84 balls, 6 fours) guided the hosts to their target with 35 balls remaining.

Victory guaranteed the Cobras a place in next week’s play-offs after they moved to 20 points on the table, with the Knights (14 points) now having to beat the already qualified Multiply Titans on Saturday and hope other final round results go their way to have a chance of progressing.

The Cape side did what they needed to do though, on Human Rights Day.

In a good showing in front of their home fans, Ashwell Prince’s side were made to field first after losing the toss, but their opponents failed to make the most of their decision at the toss.

They lost three wickets before even getting to 10 as Kleinveldt accounted for Patrick Kruger for a duck as well as Keegan Petersen for two, before Vernon Philander, who was also hugely impressive with one for 30 in 10 overs, dismissed Andries Gous (7).

All this inside the opening 4.5 overs as the Knights were in a deep hole from the off.

Captain Pite van Biljon managed just 14, before he too fell, with Rudi Second (49) and Grant Mokoena (44) then doing their best to try and stabilise things with 40s apiece. That did momentarily give the Knights hope after they progressed to 118 for four – the pair adding 73 for the fifth wicket.

Rookie Tsepo Ndwandwa (1/35) eventually broke the stand and from there it was the Kleinveldt show as he blew away the tail to end with lifetime best figures, the fifth of which took him to 200 List A wickets.

His previous best in a career spanning 172 games was four for 22 for South Africa against Pakistan at Bloemfontein in 2012/13.

The Cobras had little trouble chasing down the target, bar a point where they lost Pieter Malan (17) and Janneman Malan (25) relatively close to each other.

That left them at 56 for two, and after 27 by Aviwe Mgijima, Hamza and Kyle Verreynne (44 not out off 55 balls, 4 fours) shared in an unbroken 87-run stand that led their side to an important win. 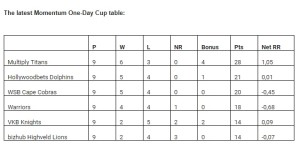