Sierra Leone continue to impress in U19 World Cup Qualifiers

Sierra Leone made short work of their latest challenge in the ICC Under 19 World Cup, Africa Division 2 on Thursday, as they breezed past Rwanda by nine wickets.

That made it three from three for the young, but extremely organised side. Having won the toss and inserted their opponents, they soon put on the strangle. Charles Kargbo led the miserly bowling effort, conceding just nine runs in his ten over spell.

His final analysis read 10-4-9-3, with his three scalps all happy to be released from his stranglehold. His final victim, Parfait Mugisha, was a case in point. Normally full of strokes, Mugisha could only muster two runs from 60 balls, before he was finally caught behind.

Rwanda were eventually bowled out for 36, in 28.1 painful overs. Chasing that meagre offering, Sierra Leone wasted little time, needing just 4.4 overs to get the job done, and losing one wicket in the process.

In the only other fixture of the day, also in Group A, Botswana got back on track with a brutal chase against fellow Southern Africans Swaziland, who had batted first. Their total of 109 all out was under-par, given the flatness of the University Ground track, but they may have reasoned with giving Botswana a bit of a challenge.

Unsurprisingly, it was skipper Phemelo Silas who stood and shoulders above the rest for Botswana. He took three for 19 with the ball, before a quickfire 29 not out, from just 15 balls, finished off the contest, as his side marched on by seven wickets. Silas struck six boundaries in his cameo, as Botswana hurried home in just 12.1 overs. His latest, all-action display continued a fine individual tournament for the 17 year-old.

The action continues tomorrow with the final games of Group A, with Tanzania, Rwanda and Botswana all in with a chance of making the knockout stage. They will join Nigeria, Mozambique and Sierra Leone. 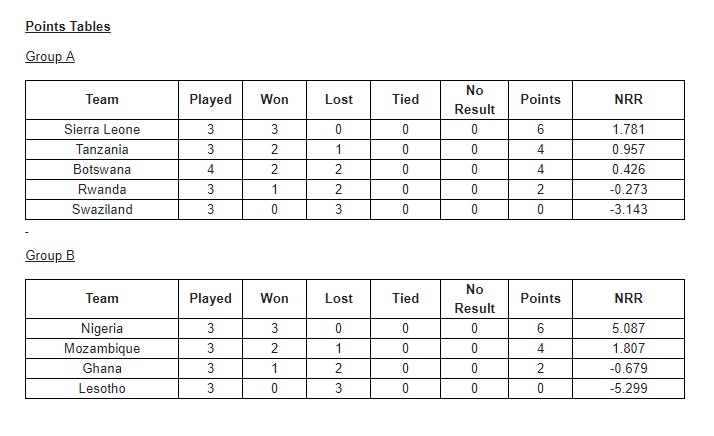