JOHANNESBURG – Cricket South Africa (CSA) has learnt with great sadness of the passing of 1960s and ‘70s SACBOC cricket legend, Hoosain Ayob, who passed away in Gqeberha on Friday, 06 May 2022 aged 81.

Ayob was born in Brits, a small town in the North West province. In 1951. After the passing of his father, his family were in dire straits and moved to Mia’s farm, run by a Muslim charitable institution, in what is now Midrand.

There was a keen interest in sport at Mia’s farm and Ayob was inspired; he went on to become both a provincial soccer player and a top-class cricketer. He was one of the leading fast bowlers in the South African Cricket Board of Control (SACBOC) era. He played 17 first-class matches for Transvaal between 1971 and 1976, taking 53 wickets at 18.41.

Ayob also played for Transvaal in the 1960s when SACBOC played five bi-annual mass inter-provincial tournaments, involving 2-day games which therefore are not recognised as first-class. These cricketers, though not recognised, and denied facilities by the apartheid authorities, were standard bearers for the non-racial cricket philosophy, which became the core values of CSA after unity.

In his recently published Biography titled, “Crossing Boundaries”, Ayob ascribes his success to learning from tips gleaned while reading cricket books, and this “characteristic studiousness carried through to my career as an educator.” He obtained a BA degree from the University of South Africa (UNISA) in 1975 and served as a teacher, headmaster and cricket coaching director.

Cricket pundits agree that Hoosain Ayob would almost certainly have played for South Africa were it not for apartheid. He made up for this after unity by becoming an important cog of the UCBSA’s coaching and cricket development structures, working closely together with his friend, Khaya Majola and Dr Ali Bacher. Such was his progress that he was elevated to the post of International Cricket Council&#39;s (ICC) Director of Development for Africa in 1998, helping to take the game to many countries on the continent.

“I was truly sorry to hear of the sad loss of Hoosain Ayob. It is a very sad day for the entire cricket family in Africa. Hoosain worked with many African countries to inspire the national cricket associations and helped to establish the game and competitions we see today. Our thoughts and prayers are with the Ayob family. May His Soul Rest in Peace.”

In a tribute to this fallen hero, CSA Chief Executive Officer, Pholetsi Moseki said: “Ayob was greater than life: he was humble, knowledgeable, and dedicated to cricket. He spent the better part of his life in the service of the game, with no personal expectations. His passing is a great loss to cricket, yet his immense contribution will reverberate in the history of cricket for years to come.”

Chairperson of the CSA Board, Lawson Naidoo added: “Hoosain embodied all that was human. Cricket owes its current trajectory to the struggles that this accomplished warrior and his ilk waged against the unjust system of apartheid.

On behalf of the Board of Cricket South Africa, I would like to thank the Ayob family for allowing Hoosain to serve the game of cricket so selflessly and diligently. You can be assured that through his relentless work, cricket in South Africa is in a better space than it was before.

“Our sincere condolences to the Ayob family, and the many cricketers whom he has touched and groomed over the years. His foot-prints will certainly remain indelible. May His Soul Rest in Peace.” 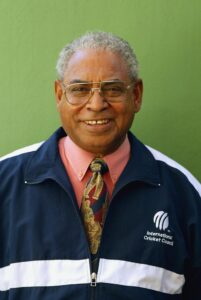 Cricket South Africa (CSA), an affiliate of the South African Sports Confederation and Olympic Committee (SASCOC) and a full member of the International Cricket Council (ICC), is the national governing body for the sport of cricket in South Africa and administers all aspects of South African cricket, men, and women, both in the professional and amateur spheres