GM Old Edwardians CC claimed the title as the only unbeaten side after a four-wicket victory over Irene Villagers CC in the final round.

The Old Edwardians were the favourites as they went into the final with a four-point lead over tournament runners up.

Western Province CC were the runners up, with only one defeat, and four points behind the winners.

Jesse Smit was named Player of the Tournament after an all-round performance for Clares CC.

CSA Senior Cricket Manager, Johan Weyers, said; “It is a great honour to be able host a successful Community Cup after the last edition was rained out and the last two years were disrupted by the COVID-19 pandemic.

“Congratulations to the GM Old Edwardians on being crowned the 2021/22 CSA champions. This is a huge achievement as this makes them the number one community-based cricket club in the country.

“Well done to all the participating teams on winning in their respective regions and making it to the final stage of the competition, the CSA T20 Community Cup.

“I would also like to thank the Titans Cricket, players and officials and all CSA affiliates and staff who have made this tournament a success,” concluded Weyers.

BURMA LADS CC won the toss and elected to field

SA RURAL won the toss and elected to bowl

Man of the match – Bruce Kerr

IRENE VILLAGERS won the toss and elected to bat

Man of the match – Joshua Lang

Player Stats and the Community Cup Log are attached. All matches are available on PitchVision. 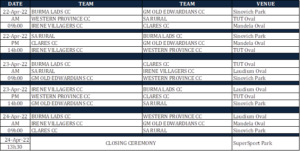