The Senwes Dragons Women were crowned champions of the CSA Women’s Provincial One Day Cup on Saturday whilst Six Gun Grill Western Province Women claimed the T20 title on Sunday.

The two teams clinched the title with a number of their senior players away on national duty with the Momentum Proteas in the ICC Women’s World Cup in New Zealand. Western Province boasting five players and Dragons Women three players in the Proteas World Cup team.

The Dragons and Western Province Women have been undisputed champions in the competitions, claiming the titles for the second time in similar fashion.

The North West-based team went into the last round of the One-Day competition with the title already in bag, 12 points clear of runners up, Western Province, on Saturday. Dragons Women then defeated the Imperial Lions Women in their last game to further extend their lead.

Senwes Dragons Women’s Captain, Izel Cilliers, said; “We had a really good season. We are a young team playing together for the second season now and learning some valuable lessons.”

“This win means a lot, especially in the second half where we missed a few big players. We really worked hard to come where we are today so I’m really happy for everyone and hope we can continue with the momentum and bring more trophies home.”

On Sunday, the Western Province Women were the favorites, four points ahead of their North West counterparts.

With a young captain leading the side, Six Gun Grill Western Province Women’s captain Leah Jones, said; “The season has been somewhat of a rollercoaster. No season is ever easy, but this season has really been one of ups and downs.”

“We didn’t start off our season too well back in October and we knew we were better than the performances we produced because of how hard we worked behind the scenes. The second half of the season was almost near perfect to say the least so winning this trophy is just an amazing feeling because we finally got something to show for all the hard yards we’ve put in.”

“Going forward we’ll carry on putting in the hours and the commitment so that we can bring home both trophies in the seasons to come.”

Imperial Lions Women defeated the Dragons Women in the last T20 game to finish their campaign in the competition as runners up.

On the other side of the standings, the Eastern Storm Women ended their campaign at the bottom of the log and will face automatic relegation.

Six Gun Grill SWD Women and Free State Women will battle it out on 09 April 2022, at the Imperial Wanderers Stadium for a spot in the Top 6. 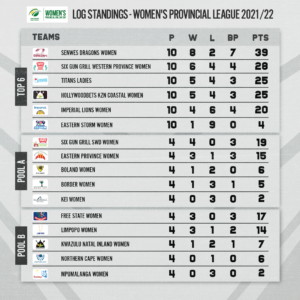 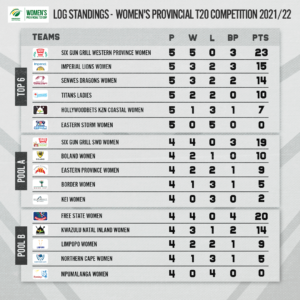