DUNEDIN: Momentum Proteas captain, Suné Luus believes her side is in a confident mood ahead of the team’s opening ICC Women’s Cricket World Cup 2022 fixture against Bangladesh at the University Oval in Dunedin, New Zealand on Saturday.

The hugely-anticipated clash gets underway from 11h00 local time (00h00 SAST) with the action broadcast live on SuperSport and the SuperSport App.

South Africa, who are ranked second in One-Day International (ODI) cricket, come into the tournament in notable form following five straight series victories since the start of 2020, including a thrilling 2-1 win over the West Indies in Johannesburg last month.

Despite going down in the two warm-up matches since landing in the country of the long white cloud in early February, Luus was pleased with the team’s overall preparation for the global showpiece: “For us the, the warm-ups were all about assessing the conditions and taking out of it what we could,” she began. “There were a lot of positives, and we could see what the conditions were going to do mostly, and it was also to give a lot of the players some game time and confidence in the middle as well.

“We are all feeling pretty confident, we had a run around on the park today, pretty cool scenes here in Dunedin, it’s a very nice ground and we are all excited for tomorrow,” Luus added. “We have played a couple of World Cups together, but I think this is the ultimate one for us and also for a lot of our most experienced players. It’s their big one and hopefully we can make it count and make it an enjoyable one.

Bangladesh, who sit sixth on the latest ICC ODI rankings, will be making their maiden 50-over World Cup appearance in this year’s tournament and will be hoping to kick off their debut campaign with only their third triumph against South Africa, with the Proteas Women having won 15 of 17 matches head-to-head.

The last time the teams faced off in ODI cricket, South Africa enjoyed a convincing 5-0 series success at home back in 2018. Although there is a gap between the two sides on the rankings table, Luus is taking nothing for granted against the subcontinent outfit.

“They are a very good side, it’s their first World Cup as well, so we hoping to just apply our basics correctly and put them under pressure early on. The contest in Dunedin will also be a full circle moment for Luus, as the all-rounder, who is skippering the side in absence of the injured Dané van Niekerk, will be leading the team out in a World Cup match for the first time, having also made her international cricket debut against Bangladesh in September 2012.

“It was pretty cool, the stadium (in Mirpur) was full, one of the best experiences in my life,” Luus
said.

The team will be without opening batter, Lizelle Lee who is currently completing her Managed Isolation and Quarantine (MIQ) period after arriving in New Zealand in the last week following the birth her son. 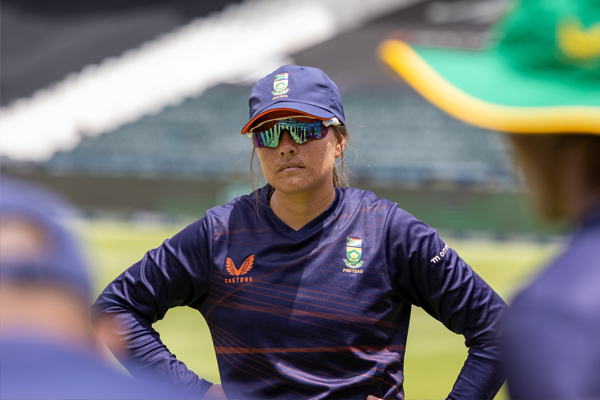