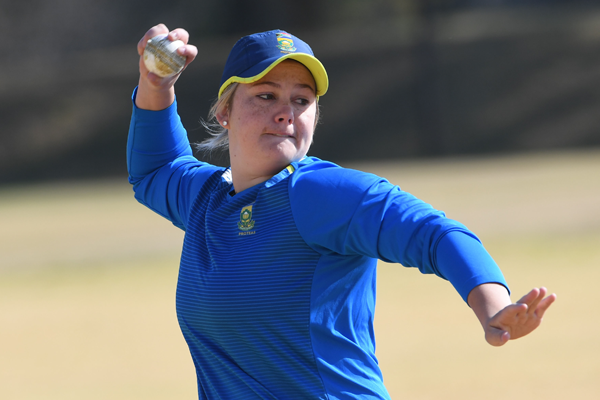 Injured Momentum Proteas captain Dane van Niekerk has welcomed this week’s announcement by Cricket South Africa (CSA) regarding their extensive mid-year tour of England, which will include a rare Test match.

The two countries will face off between 27 June and 25 July in three One-Day Internationals (ODI) and three T20 Internationals that will be preceded by a first red-ball clash for the South Africans in more than eight years.

The four-day Test match will kick-off the bumper trip and precede the limited-overs leg of the journey. It will be their first international long-format match for Hilton Moreeng’s charges since playing India in Mysore during November of 2014.

“It’s always fun to go there,” was Van Niekerk’s initial thoughts about the tour. “They are quality opposition and it will undoubtedly be tough.

“But I’m just excited to go back there knowing we can really compete, especially with the strides the team has made in the recent past. I’m confident we will compete really well against them.”

The last time the two countries met in any format was in 2018 when the hosts won a three-match ODI series 2-1.

But the real highlight of the tour is expected to be the one-off Test. This will be South Africa’s fifth Test since the turn of the millennium and only their 12 th overall.

It is a format of the women’s game that is slowly starting to feature more and Van Niekerk is excited to see how her team adapts.

“It’s going to be interesting,” she said. “We’ll need to do a lot of work in terms of the tactics and the way we approach the game.

“We’ve only ever been playing limited overs cricket really and the tactics for Tests are completely different.

“But it will be exciting to see how things go tactically and the choices we’ll have to make. That will be a highlight because we’ve only played one Test in my time – and we failed miserably in that game. Hopefully I will be part of it and be able to make a valuable contribution.”

Van Niekerk was one of eight debutants for the Proteas Women in that previous Test on the sub-continent, with four others Chloe Tryon, Lizelle Lee, Marizanne Kapp and Mignon du Preez, also featuring.

“I think Test cricket’s something that’s good for the women’s game,” she explained. “I always say that I wish I’d grown up with it, but I never had that opportunity because it was not a format the women regularly played. “It really brings about the best in you as a player. “I think the era that I’m now in as a player is to try and set that format up for the next generation so that it becomes a feature in women’s cricket, both at schools and going to provincial cricket as well.

That the red-ball game can become more regular and something that can appeal to the public as well.”

Some of the bigger nations have already been playing longer-format cricket in recent years and Van Niekerk hopes she can play a role in her country also doing the same.

“England and Australia are starting to set it up really well and India are not far behind,” the 28-year-old said. “It obviously makes for great opportunities.

“I’m probably not going to be there in the next 10 years, but I mean it will be good to end my career with some Test cricket under the belt. Obviously the experience as I mentioned and being part of something big like setting things up for those that are to follow.”

The star all-rounder has been beset by injuries in recent years and is currently at home nursing another one – this time an ankle problem she sustained after a freak injury at home.
It means she will not be leading the team at the ODI World Cup in New Zealand starting next month.

“I’m very disappointed, it&#39;s been a really difficult time for me personally especially having all these injury setbacks when it comes to cricket,” a heartbroken Van Niekerk explained. “And this on top of those had nothing to do with cricket. It just puts you back a little as a person mentally, especially with the team being there.

“I found it very hard the day they left… Well I had two hard days, the day they announced the World Cup team and the day they left. It just was finality for myself that I’m not going after four hard years building up to this point with the team. So it’s been difficult.”

The skipper is nonetheless tipping Moreeng and his team to do well at the global spectacle.

“I’ve seen the work first-hand that has been put in by the team,” she said. “They have worked their bums off in the past few years and the results of that are evident for all to see on the field.

“They have performed exceptionally. It is also testament to the hard work put in by the backroom staff. The biggest thing has been that the core has stuck together and those that have come in have managed to settle in well.”

As for her injury, Van Niekerk is expecting to start her rehab by the end of February. She is confident of being fit for the tour of England, which will be followed by the Commonwealth Games in Birmingham where the team will also feature.

“The main goal is to be part of those squads,” she concluded. “I’d really like to not ‘not’ play for my country anymore.”