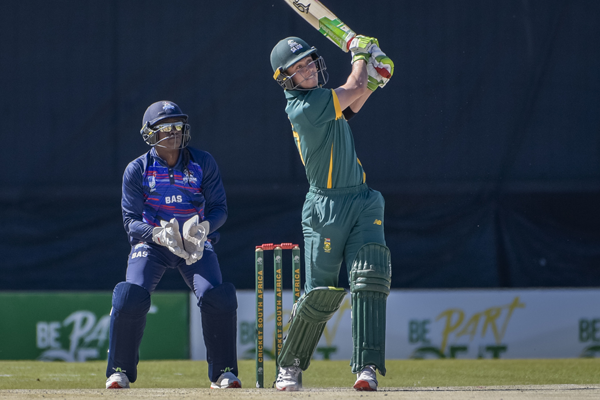 The CSA T20 Challenge has been the talk of the town this week following the start of the competition in Gqeberha on Monday and the tournament is set to receive another shot in the arm when a certain Dewald Brevis enters the fray in the Eastern Cape on Wednesday.

One of the stars of the recently concluded ICC Under-19 World Cup in the West Indies, the 18-year-old will join the Managed Event Environment (MEE) when he links up with his Momentum Multiply Titans team-mates.

Brevis, in his first season as a contracted player for the Centurion-based franchise, scored an astonishing 506 runs at the global spectacle – a tournament synonymous for launching the careers of multiple cricketing legends.

The likes of Quinton de Kock, Kagiso Rabada and Aiden Markram all represented South Africa at the tournament over the years, while other global superstars such as Brian Lara, Inzamam-ul-Haq, Sanath Jayasuriya and Virat Kohli also made a name for themselves at the finals.

It no doubt places Brevis in elite company and his record run-haul saw him eclipse the previous record of 505 runs that was held by India opener Shikhar Dhawan.

“It was such a big honour to accomplish what I did,” the modest teenager said ahead of his departure to the Windy City. “I’ve worked so hard for it and I believe just doing the simple things right made all the difference.

“That helped so much in the conditions we played and against the teams we faced.” And what about the runs he scored which saw him earn the the Player of the Tournament award?
“I was really humbled because you see the names of all these guys that have gone to the U19 World Cups over the years,” he said. “They are guys that you grew up watching and players that have turned out to be absolute legends of the game.

“They dominated cricket for years and to hear your name mentioned amongst theirs is unbelievable. It’s a massive motivation for me to continue in the same way.”

Brevis has been taking plenty of guidance from South Africa’s strong U19 coaching team over the last few months. Ex-national batsman Neil McKenzie and coach Shukri Conrad have played a big role in his rise, with words by the former particularly sticking.

“They played a big role in a lot of things, both technical and mental,” he explained. “I think what they taught me about the mental part, how you think about your game…those words have helped a lot.

“It’s very important for me to keep focussing on the process and not be overwhelmed. I know it’s important to stay grounded and keep on doing the things that have worked for me.

“It’s vital for me that in every game I play just to start over, to take it as a new game and to keep it simple. Those words are so important ‘keep it simple’ because if you have a few options and shots to play, sometimes you can get carried away. But when you keep it simple, things get easier.

“These words came from coach Mac and they really helped me in my game. Just keep repeating that approach and when you do that, you know what are the things you need to focus on out there.” Something else that has transpired since Brevis’ heroics at the World Cup are comparisons with Proteas legend AB de Villiers. The style and class of the youngster has seen him dubbed ‘Baby AB’, something he is also extremely flattered about.

“To be called Baby AB…I don’t even know what to say. I am nowhere near what AB de Villiers was. He is a guy I grew up idolising, he was my role model from the first time I watched cricket. But I love being called that, it’s a real honour and surreal.”

Brevis, though, does want to now begin establishing his own identity.

“I want people to also see and know all about Dewald Brevis or as DB,” he says. “Hopefully I’ll have the opportunity to do it when I join the squad.”

And he will be joining a Titans team packed with internationals.

Their squad includes none other than the Proteas limited-overs wicketkeeper De Kock, Heinrich Klaasen, Theunis De Bruyn and Tabraiz Shamsi.

“I didn’t expect to be in the squad so soon,” he adds. “But now that I’m there, it’s a wonderful opportunity, especially if you look at the squad that the Titans have.

“When I saw the team list I literally could not believe my eyes. I can’t wait to spend time with them and learn from them because I believe that will help my game so much more.

“Sometimes it’s just to listen and to be in an environment with these players. You don’t even have to talk, you just listen and that will help so much. I can’t wait!”

Valentine Kitime and Michael Copeland, both of the GbetsRocks.