100 AND COUNTING – MARAIS ERASMUS SET FOR ANOTHER LANDMARK 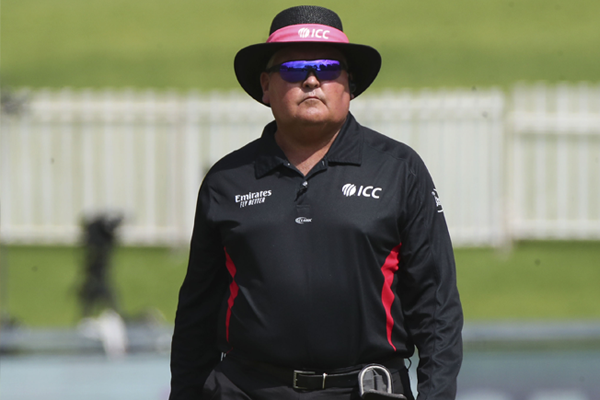 18 Jan 100 AND COUNTING – MARAIS ERASMUS SET FOR ANOTHER LANDMARK

Seasoned umpire Marais Erasmus will become only the third South African to stand in 100 One-Day
Internationals when he officiates in the first Betway ODI between the Proteas and India on
Wednesday.

The 57-year-old will join the duo of Rudi Koertzen and David Orchard when he steps out at Boland
Park in Paarl.

Erasmus has been officiating at the highest level since 2007 and has also been the man in the middle
for 70 Tests, 35 Twenty20 Internationals and 18 Women’s T20Is.

He says that reaching this latest landmark is another pleasing moment in what has been an
illustrious career thus far.

“I’m very proud to have survived long enough to get to this milestone,” the George-born official
beamed. “It’s a tough environment to survive because we’re under scrutiny all the time, so to have
gotten through that period fills me with pride.

“We are all servants of the game, but sometimes when milestone are reached, we are recognised,
which is really nice.”

Erasmus, who will become the 18 th umpire to reach 100 ODIs, and his family has sacrificed a lot to
get to where he is, and he is grateful for the support they have offered along the way.

“It was challenging when I started because of the amount of travel, so I’m extremely grateful to my
wife Adele, who left her job to be both mum and dad for our twin boys,” he said. “They’ve all been
fantastic and extremely supportive, especially her.

“And now in Covid times where I’ve been in a bubble for six weeks, she’s alone for Christmas, so it’s
been tough at times. But umpiring has given us so many opportunities. We’ve travelled the whole
world as a family, so there’s been more good things than bad.”

Erasmus says that getting to 100 ODIs was never something he thought about when his journey first
began in Nairobi on 18 October 2007 – in a match between Kenya and Canada.

“When you start out, you never look that far ahead,” he explained. “It’s obviously a new thing and
you try to enjoy those moments, which is what I’ve done.

“But as you get on to the third and fourth and fifth year, you naturally then think about reaching 50
or whatever landmark is closest. So getting 100 is fantastic, but it’s not part of the goal-setting. You
just want to be there and do the best job you possibly can.”

Erasmus is widely recognised as one of the best umpires in the world. Although pleased to hear
those words, he admits it does come with responsibility.

“We don’t want to be talked about and normally when that happens it’s because we made a
mistake. I’m just really happy that things have gone the way they have.”

So does Erasmus have any preference when it comes to umpiring? Like players, he concedes that
Test cricket is the most gruelling and can be tough on the officials too.

“Umpiring Test matches are definitely more challenging because of the length of games and the type
of pressures that go with it,” he concluded. “Therefore, it is far more taxing, but that’s not to say
that ODIs and T20Is aren’t.

“With the limited overs, if you have a bad day you know you don’t have to be on the field tomorrow,
but with a Test you know you have to come back and that is just psychologically challenging,
especially if you have a bad start. You know it can be a long five days.
“They all bring different challenges, the different formats, but I’ve enjoyed everything about
international cricket so far. I’m really motivated to continue. I’ll be 58 next month and I’m still keen
to do another two or three years.”

Erasmus will be on duty on Wednesday. You can catch him umpiring the Proteas against India live on
SuperSport and SABC 3, with live updates on the Official CSA App.