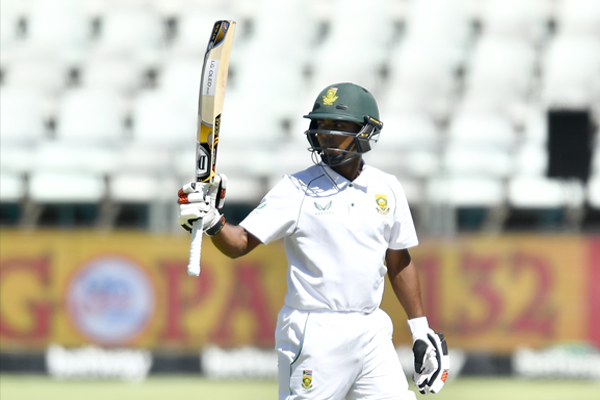 The 28-year-old was named Player of the Series after his outstanding exploits with the bat against
India in the Freedom Series.

The stylish right-hander was the top run-scorer in the three-match Test sequence, amassing 276 runs
at an average of 46.00. He was the only player to score more than three half-centuries, recording
scores of 72, 82 and 62, whilst his slip fielding was another hallmark of the series.

Petersen says to accomplish what he has over the last few weeks was difficult to believe.

“It hasn’t completely sunk in yet,” he said. “I still can’t explain how it feels completely despite it
being two days already.

“Myself, my family and everyone close to us are still trying to get over it somehow. It was a
challenging series against one of the best bowling attacks in the world.

“It was by far the most challenging bowling I have come across in my career, whether it’s been in
first-class cricket or any form of cricket.”

Petersen has now played five Tests for South Africa, although his previous three innings – all against
West Indies – did not yield too many runs.

“It hasn’t been an easy introduction for me to international cricket, but I honestly wouldn’t have it
any other way,” he explained. “My journey’s unique and it’s my story to tell as well.

South Africa lost the first Test by 113 runs in Centurion, before storming back with successive seven-
wicket victories in Johannesburg and Cape Town.

It was the biggest win for the Proteas since Dean Elgar was appointed Test captain and Petersen has
hailed the leadership of the new skipper.

He added: “Deano as our captain, he’s going to, he has and he is going to achieve great things as well
as a captain. He’s a brilliant leader and we wouldn’t want anyone else to lead us.

“The achievement for us as a squad, we know the chips were down and the odds were against us
especially after the first game where we were beaten. It wasn’t a good scenario, but we had a couple
of strong chats after the game looking at ways to bounce back.

“It’s just our personalities and character as South Africans, even though we’re the underdogs, we
always come back fighting. That’s just how we are and we showed that during this series. Hopefully
it carries on for years to come.”

The two teams will now move on to the three-match One-Day International leg of the tour that
begins on Wednesday, 19 January, in Paarl.

The tour is being broadcast live on SuperSport, SABC and Radio 2000.