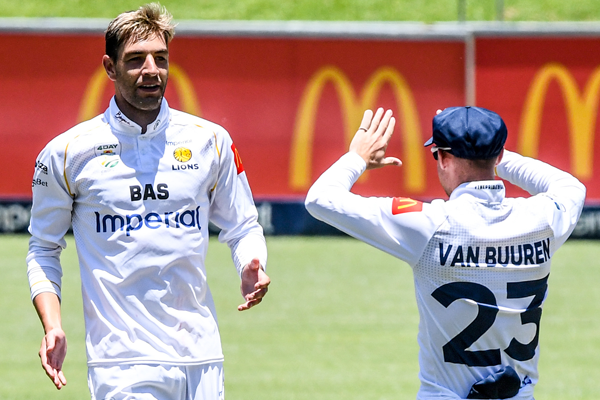 Fast bowler Duanne Olivier is thrilled about the prospect of representing the Proteas again, nearly
three years after his last appearance for South Africa in Test cricket.

The in-form 29-year-old has been reintroduced to the national set-up after returning from a
prolonged stint in the United Kingdom – and then impressing in the local domestic set-up during the
early part of the 2021/22 season.

Earlier this month, Olivier was named amongst a strong 21-man squad of players for the three-
match Freedom Series against India, which starts with the first Betway Test at SuperSport Park in
Centurion from 26-30 December.

“It’s a massive honour to be back,” Olivier said of his recall. “It is a surprise for me because I didn’t
expect it at all, so I’m really thrilled to be back.

“It’s a big series coming up for everyone at CSA (Cricket South Africa), so for me being back in the
squad I’m very happy. Wherever I can contribute to the team, whether it’s on the field or off it, I’m
ready to do it and I look forward to it.”

Olivier’s last Test appearance for South Africa was in Gqeberha against Sri Lanka in February of 2019.
He has since returned with a bang to the CSA Four-Day Domestic Series, ending this year as the
leading wicket taker, eight scalps clear of number two, Simon Harmer.

The Imperial Lions paceman has claimed 28 wickets in eight innings at an average of 11.14 with best
innings bowling figures of 5/53.

He has been preparing with the rest of the squad in a bio-secure environment (BSE) – conditions
forced upon them due to the ongoing Covid-19 pandemic – since the weekend.

Olivier continued: “I haven’t been here for three years, so it’s been a long time. But it’s always
special for any person to play for your country. It is very special to me and it will be special for
anyone coming into the team.

“I don’t think it will be like my debut all over again, this will be completely different I feel. I am
generally a nervous person so I expect some nerves. So the feelings will be different. It will be
interesting to see what the nerves will be like, but I’m sure if I am selected to play then my nerves
will be shot through the roof.”

The Groblersdal-born player, who has claim 48 wickets in 10 Tests thus far, believes he has evolved a
lot as a player since he last played for the Proteas.

“I feel like I’m a different player now, I’m a bit older…a bit more grown up,” he chuckled. “From a
cricket perspective, I do feel I’m a bit different as well.

“The UK has helped me a lot with just perfecting that fuller length that every bowler wants to bowl.
For me it was quite difficult because it could come across as floaty and not being as consistent.
“I’m still working on it and won’t get it right every single time, but I’ve played three years in the UK
and it’s helped me immensely just the way I approach my game. Previously people saw me as a
bowler who only bowled short, but now I feel I have an extra element to my game.”

Olivier is also looking forward to facing one of the best teams in the world, adding: “It will probably
be the biggest series I will play.

“India are not the number one team for no reason. They haven’t won here, so they’ll want to come
here and want to win. For us, we don’t want that to happen.

“If selected then there will be those pressures that with playing against world-class players, but at
the same time it’s a really exciting challenge.

“If I think right now of the opportunity to bowl to (Virat) Kohli, it will be tough, but it’s really exciting
at the same time thinking that I will be bowling to probably the top four batters in the world.
“It’s like making a statement to them, letting them know that we’re here to compete and challenge
them. It’s very exciting.”

The series will be broadcast live on SuperSport and SABC, with live updates on the Official CSA App