WESSELSBRON: Cricket South Africa (CSA), in partnership with the Senwes Group and the Department of Basic Education (DBE) took one small but significant step towards making the game of cricket accessible to all when they presented Itokisetseng Combined School in Wesselsbron in the Free State with brand new net facilities and playing equipment.

This initiative is a part of an ongoing and fruitful partnership between CSA and the DBE, that is an operational agreement to advance the growth of development cricket in schools across the country.

This partnership has also seen more than 50 Hubs and Regional Performance Centres (RPC) benefit from the equipment and operational assistance, including the development of players as well as the running of school leagues within the Hubs.

In what will be a defining moment for at least one child present at the farm school in the town situated near Bothaville, the Department also handed over a fully equipped mobile kitchen as part of the DBE’s National School Nutrition Programme that feeds over nine million learners daily.

The Senwes Group, through the Free State Cricket Union, who also invited the ITEC Knights head coach Allan Donald as a guest speaker, provided the new cricket nets as part of their long-held commitment to the Senwes Farm School Project.

CSA’s Transformation and Stakeholder Relations Executive, Max Jordaan, explained the importance of this initiative and how it impacts the development pipeline.

“It’s a wonderful opportunity, where we collectively bring about value creation for the school and the community. And with initiatives such as the Senwes Farm School Project, it is worthwhile to invest because these youngsters will grow up and become players and will join our pipeline,” said Mr Jordaan.

“We are now in the Free State, having started in the North West, and it is just magical to be a part of such a collaborative grouping to make massive change where it is needed most,” he added

Along with the cricket facilities that will help the budding cricketers in the school and surrounding areas perfect their skills, the mobile kitchen will be responsible for offering lunches to the pupils and staff at the school.

Director in the Sport and Enrichment Programme at the Department of Basic Education, Sifiso Ngobese, said: “When we see facilities like these we are over the moon, and it is our mission to help see that initiatives like these spills over to other regions.

“We applaud this programme and thank the partners involved for allowing children in rural communities to hone their skills and enjoy the same opportunities as their counterparts in the cities,” he commented.

Along with the Farm School Project, the Senwes Group have also backed the Senwes Spinners Programme to enhance the growth of the future stars.

“Everyone and everything has a story, and the story of the Senwes Spinners Programme speaks of enablement, potential, and a drive to strengthen the communities in which Senwes conducts its business,” Francois Strydom, Group Chief Executive Officer: Senwes Group stated.

“Through this programme and the partners involved, we are creating developmental hubs and taking ownership of the future,” Strydom added.

Ndaba Boneni, the principal of the Itokisetseng Combined School expressed her gratitude for all the support received from the various stakeholders.

“Thanks to Senwes, Thobo Trust and now Cricket South Africa, our children can dream big because through these partnerships, the potential is being put in motion,” Ms Boneni stated.

For more on the special day at the Itokisetseng Combined School, you can download and view an insert with interviews and cutaway footage here. 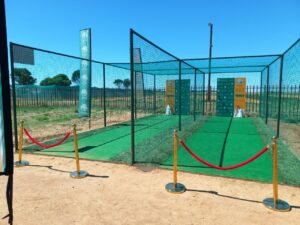 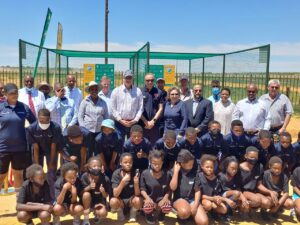 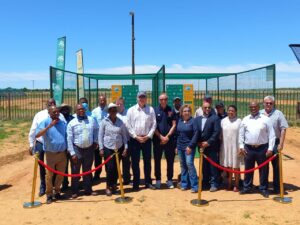