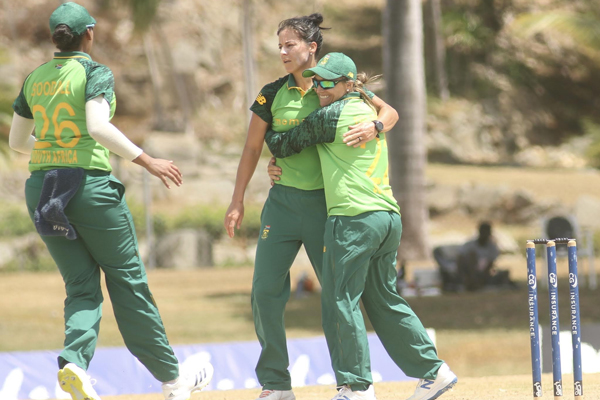 ST JOHNS, ANTIGUA : A strong bowling performance helped the Momentum Proteas take a 2-0 lead in the five match Women’s One-Day International against the West Indies Women with a comfortable nine-wicket win in the second WODI at Coolidge Cricket Ground in St Johns on Friday.

Marizanne Kapp lead a clinical bowling display by claiming three for 24 as the hosts were bundled out for 120 in 44.2 overs. Unbeaten half-century by Laura Wolvaardt (71* off 84 balls, 8 fours) lead a strong reply as the visitors won with more than 24 overs to spare.

It was a good continuation by the Proteas Women especially following their convincing win on Tuesday in the first WODI.

The hosts won the toss and batted at the start, with Hayley Matthews (3), Kyshona Knight (5)  and Deandra Dottin (1) – out cheaply to Marizanne Kapp who was a constant thorn in the Windies top order.

Chedean Nation (15) and Kycia Knight (22) then made a decent attempt to rebuild with a 31-run fourth-wicket partnership that took West Indies up to 49 for three in the 20th over.

But things went all horribly wrong from there as Van Niekerk (2/14), Ayabonga Khaka (2/13) and Sune Luus (2/27) cut through the middle order and tail, the hosts dismissed with five overs remaining. Another Clinical bowling performance by the in form Momentum Proteas.

Hayley Matthews (1/13) did manage to land the early blow to the Proteas Women’s chase when she had Lizelle Lee 18 (19) caught at deep mid- wicket, luckily for the South Africans that was the only scare as an unbroken 86-run second-wicket partnership between Wolvaardt and Lara Goodall 25* (51) charged the Proteas to victory.

Match three of the series takes place on Monday, 13 September at the same venue.