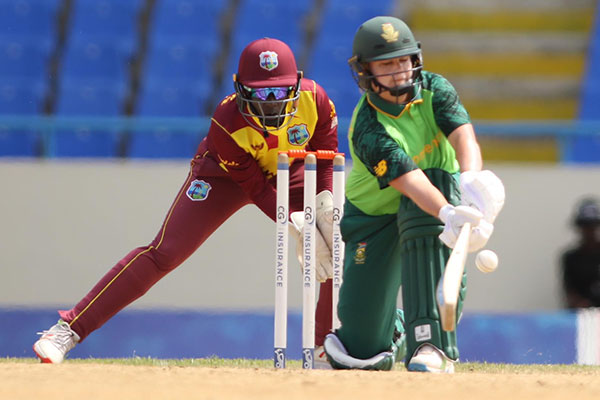 St Johns, Antigua – The first Twenty20 international match between the Momentum Proteas and West Indies Women in Antigua and Barbuda was called off due to rain.

The Proteas women, who won the toss and elected to bat posted a competitive total of 135 for the loss of 3 wickets in their allocated 20 overs.

Openers Lizelle Lee and Dane Van Niekerk led the attack, but could only combine for 31 runs after Van Niekerk 15 (15) was caught after attempting a sweep shot. Marizanne Kapp entered the fray and steadied the ship alongside Lee 30 (30) who was run out by some brilliant fielding from the hosts. Kapp soon followed in the 15th over after attempting a big shot, but was caught at deep square leg with the score at 87/3.

The middle-order duo of Laura Wolvaardt 35 (21) and Tazmin Brits 14 (11) combined for a well-played 48-run partnership to help the Proteas Women post a competitive total of 135.

After just two overs in The Windies run chase21/1, rain struck and the match was halted for more than an hour before it was abandoned.

The second WT20 game is scheduled for Thursday at the Sir Viv Richards Cricket Ground.