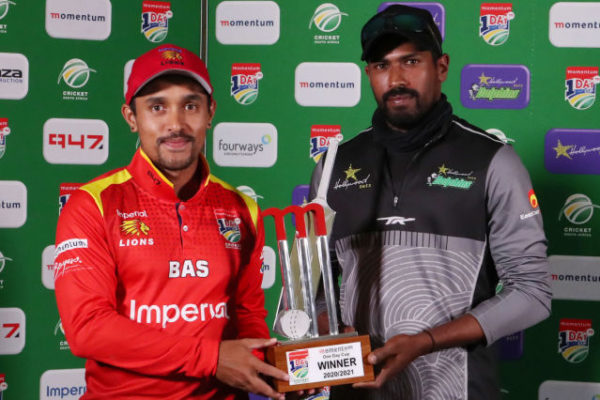 The tournament offered the opportunity for the six franchises the chance to win the first domestic trophy on offer for the season when it was played within a bio-secure environment (BSE) in Potchefstroom.

The Dolphins and the Lions were the two teams to reach the final but did not have the full opportunity to complete their contest after heavy rain on both days that had been earmarked for the deciding game.

Thursday’s schedule final was abandoned without a ball being bowled, before the teams began playing on the reserve day of Friday until mid-afternoon rain curtailed their prospects of completing the match.

“Cricket South Africa would like to congratulate both the Dolphins and the Lions on their achievement of winning the Momentum One-Day Cup,” CSA Acting Chief Executive Officer, Pholetsi Moseki, stated. “Their success is well-deserved and both teams proved that they are worthy champions.

“They were the best teams in their respective pools, which they won, and it was a pity that they could not complete what promised to be a very exciting final.

“This season’s competition also broke new ground for the players and the coaching staff of all the teams as it allowed them to experience ‘bubble life’ for the first time. It was not easy for them, but they all deserve a lot of praise for the way they adapted and played each game with utmost professionalism.

“I would also like to thank our sponsors Momentum for their continuous support with the 50-over competition. It is always a pleasure working with them,” concluded Moseki.