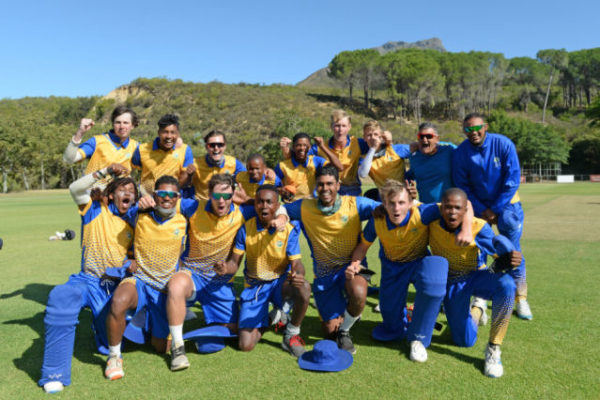 STELLENBOSCH: Contrasting half-centuries by Ethan Cunningham and Daniel Smith together with a disciplined bowling display helped the Six Gun Grill Cape Cobras ease to the Cricket South Africa (CSA) Under-19 Franchise Cubs Week title after they crushed the Momentum Multiply Titans in the final in Stellenbosch on Sunday.

The Cape side won by a thumping nine wickets to conclude the 14th edition of the tournament, being played in a bio-secure environment (BSE) at the University of Stellenbosch, as the only unbeaten team.

The Hollywood Dolphins came in third place after overcoming the Imperial Lions by 14 runs in their play-off, while the Warriors were finally rewarded for their endeavour with an 87-run triumph over the VKB Knights – their first victory of the week and one that saw them end in fifth.

But the final day was all about the competition’s best team and deserved winners, the Cobras after they cruised past the Titans at the Coetzenburg Oval.

After winning the toss and batting, their Centurion-based opponents could only manage a modest 201 for seven after two wickets each for Asakhe Tsaka (2/31), Salmaan Ajam (2/35) and Darian Naidoo (2/55).

A rare failure from captain Jordan Hermann meant that someone else had to stand up for the Titans and Dewald Brevis had to be that batsman with his attacking innings of 62 off 67 balls (9 fours).

He lacked major support, though, with Nathan Steyn’s 34 just about helping their side cross 200 and leave the Cobras favourites.

Captain Smith then dropped anchor during the chase with an unbeaten 77 (120 balls, 10 fours) that allowed Cunningham (79 off 69 balls, 12 fours, 1 six) and Nicholas Keevy (43 off 40 balls) to attack and play freely – the Cape Town-based team coasting to victory with 12 overs to spare.

Luc Benkenstein starred with bat and ball as the Dolphins edged out the Lions at Tassies Oval.

Liam McCarthy took four for 39 for the Lions, who then struggled in the reply and were restricted to 197 all out.

Finally, a century by Adam du Plessis proved key in helping the Warriors beat the Knights at Maties D Field.

After winning the toss and batting, the Eastern Cape franchise amassed 283 for five with the wicketkeeper crunching 141 off 148 balls (12 fours, 3 sixes). Jade Smith was also amongst the runs with 55 (78 balls, 6 fours, 1 six).

The top performers of the past week now have a chance of being named in the SA Under-19 squad, which will be named in the coming days.

For all scorecards and to watch highlights from the U19 Franchise Cubs Week in Stellenbosch, visit www.pitchvision.com.