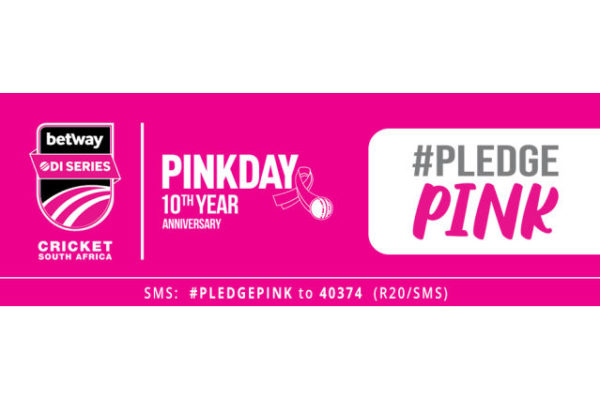 JOHANNESBURG: The Proteas returned to winning ways in the Betway One-Day International Pink Day at the Imperial Wanderers Stadium on Sunday, April 4, 2021 when they beat Pakistan by 17 runs in a match that lived up to the traditions of this iconic sporting day.

Although Covid-19 protocols prevented any spectators from attending the match the generous support of all the game’s stakeholders enabled the sum of almost half a million rand to be raised for breast cancer awareness, treatment and research with the Charlotte Maxeke Academic Hospital being the beneficiary of funds raised.

The final amount raised was R436 983 thanks in the main to the support of Betway (R279 000), which included R109 000, for the number of 4’s and 6’s hit during the match, Momentum (R50 000) and the South African Cricketers’ Association (R100 000). The balance came from individual donations and the virtual ticket purchase activation through Ticketpro.

The brilliant batting of Fakhar Zaman, who played the highest ever individual ODI innings at the Imperial Wanderers Stadium of 193, Quinton de Kock, Temba Bavuma, Rassie van der Dussen and David Miller led the charge to a combined total of 69×4 and 20×6 being hit during the match as a total of 665 runs were put on the board.

“It was inevitable that our fund-raising efforts on Pink Day would be hampered by the circumstances of the current time,” commented CSA Acting Chief Executive Pholetsi Moseki. “It was nevertheless a great effort by our generous sponsors, our public and our players that we were able to make a significant donation to this worthy cause.

“I would like to extend a special vote of thanks to our friends at the Pakistan Cricket Board who gave their full support to this project as has been done by all the other teams and countries that have played here over the past decade. This was, in fact, the third time that Pakistan have supported Pink Day.

“The Pink Day is one of THE icon events on the South African sporting and social calendar alongside the likes of the Pirates-Chiefs derby and the Nedbank Golf Challenge,” added Mr Moseki. “It was highly appropriate that this year’s match fell in the same week as the 150th anniversary of Charlotte Maxeke’s birth.”

“Betway is proud to be part of the efforts in raising awareness and mobilising cricket fans through the Pledge Pink campaign,” commented Betway Marketing Manager, David Rachidi.

“As a brand that cares about the communities in which it operates, we are aware of the on-going plight of the hospital, making this small contribution even more important. The Charlotte Maxeke Academic Hospital plays a big role in helping South Africans overcome some of their most challenging times of their lives.

“We thank Cricket South Africa, other sponsors and cricket fans who, though they could not attend the game, still went out of their way to make Pink Day happen,” added Mr Rachidi.

Carel Bosman, Lead: Sponsorships & Events, Momentum Metropolitan, commented: “We as Momentum would first like to congratulate CSA on hosting the Pink ODI during very challenging times; and it is so worthy and so right that it happened because, if we look at pure statistics, 19.4 million women in SA over the age of 15 are likely to be diagnosed with breast cancer which makes this a much bigger pandemic for us to fight jointly than what Covid is now.

“So, for us at Momentum, we are grateful to be part of this journey and we thank all the other partners and sponsors who also contributed to the day.”