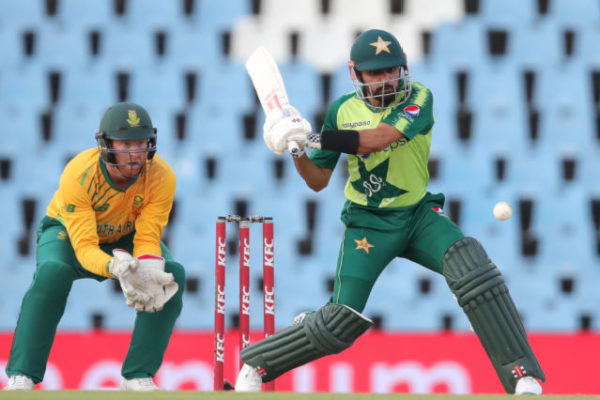 TSHWANE: A spectacular century by Babar Azam helped Pakistan secure a 2-1 lead in their four-match KFC T20 International Series against the Proteas after they comfortably won match three by nine wickets at SuperSport Park in Centurion on Wednesday.

The visiting captain struck 122 off just 59 balls (15 fours, 4 sixes) and shared in a record 197-run opening partnership with vice-captain Mohammad Rizwan, who ended unbeaten on 73 off 47 balls (5 fours, 2 sixes), as the tourists chased down 204 with two overs to spare.

Earlier on, half-centuries by the in-form Aiden Markram (63 off 31 balls, 6 fours, 4 sixes) and Janneman Malan (55 off 40 balls, 5 fours, 2 sixes) provided South Africa with a strong start that put them on course for well beyond 200, before they tailed off slightly at the end.

And Pakistan then made merry at a venue they have not lost at so far on their tour, securing a key win that meant they now cannot lose the series with just one match to come on Friday.

The Asian side won the toss and opted to field first, but that looked the wrong call as Markram and Malan both flew out of the blocks.

The former scored his third successive half-century, with Malan going on to record his maiden 50 in the format in an opening stand that yielded 108.

George Linde, promoted to bat at three, clubbed 22 off 11 balls to maintain the momentum, before he and Malan fell in quick succession.

That brought two new men to the crease in Rassie van der Dussen and skipper Heinrich Klaasen. The pair were not as free-scoring as the men before them, scoring 34 not out and 15 respectively, with Andile Phehlukwayo finishing the innings with 11 off eight balls.

The South African bowlers were then humbled by the incredible Babar and Rizwan as they attacked throughout.

They raised the 50 in the sixth over and the 100 in the 10th over, before beating the highest partnership total for any wicket of 143 between Ahmed Shehzad and Mohammad Hafeez against Zimbabwe at Harare in 2013.

Babar then went on to score his maiden ton, before progressing that to the highest individual T20I score ever by a Pakistani.

He finally fell to Lizaad Williams (1/34) with seven to get, before Rizwan and Fakhar Zaman (eight) carried their side home with 12 balls to spare.