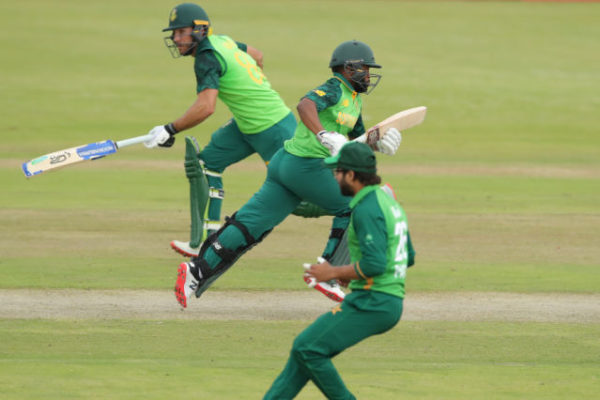 Temba Bavuma and Janneman Malan of South Africa in action during the 2021 3rd Betway One Day International match between South Africa and Pakistan at Supersport Park Stadium, Centurion, on 07 April 2021 ©Samuel Shivambu/BackpagePix

TSHWANE: Half centuries by Janneman Malan, Kyle Verreynne and Andile Phehlukwayo were not enough as a much-changed Proteas fell to a 28-run defeat to Pakistan in their Betway One-Day International series-decider at SuperSport Park in Centurion on Wednesday.

There was also an impressive three-wicket haul from Keshav Maharaj – although all their efforts were in vain as the tourists clinched the key result that secured them a 2-1 scoreline in the three-match sequence.

In another high-scoring affair, South Africa won the toss and opted to bowl first, but most of their bowlers struggled as the visitors amassed 320 for seven, which was led by Fakhar Zaman’s second consecutive century after he made 101 (104 balls, 9 fours, 3 sixes).

There were also important contributions from captain Babar Azam (94 off 82 balls, 7 fours, 3 sixes) and Imam-ul-Haq (57 off 73 balls, 3 fours), together with a devastating unbeaten 32 off 11 balls by Hasan Ali that proved to be a real turning point of the game.

In reply Malan lead the hosts well out of the blocks with 70 off 81 balls (9 fours), but regular wickets at the other end kept Mark Boucher’s side under the pump.

Verreynne (62 off 53 balls, 3 fours, 3 sixes) and Phehlukwayo (54 off 61 balls, 3 fours, 2 sixes) did their best to keep the South Africans in the hunt with a century stand, but once they fell Pakistan closed out victory, and subsequently won their first away ODI series against a top-seven team since 2013 when they also beat the Proteas.

The home side did enter the match without most of their regulars – Quinton de Kock, David Miller, Anrich Nortje, Kagiso Rabada and Lungi Ngidi had to leave early for the IPL and Rassie van der Dussen missed out due to injury. Tabraiz Shamsi was also replaced by Keshav Maharaj meaning there were only four players in the XI who did duty in the Pink ODI win on Sunday.

Pakistan capitalised fully on the changes by making a strong impression with the bat from the get-go, reaching 206 for one at one stage thanks to the top three of Fakhar, Imam and Babar.

However, the South Africans then had their moment, clawing things back exceptionally thanks to Maharaj (3/45) and Aiden Markram (2/48) to leave the Asian side on 257 for six with four overs to go.

But Hasan and Babar exploded emphatically at the death, clobbering 63 in the last four overs, including one Jon-Jon Smuts (1/67) set in which he conceded four sixes to the former, to help their side set a target of 321.

South Africa needed their openers to fire in order to stand a chance. But they critically lost Markram early for 18, with Smuts (17), Temba Bavuma (20) and Heinrich Klaasen (4) following.

That left the total on 140 for five, before hopes were then raised in a 103-run sixth-wicket stand between Verreynne and Phehlukwayo.

The pair reduced the equation to 72 from the final 39 balls, before falling in quick succession. And with them went South Africa’s chances as Mohammad Nawaz (3/34) and Shaheen Shah Afridi (3/58) ended with six wickets between them.

The Proteas were eventually bowled out for 292 with three deliveries to spare.