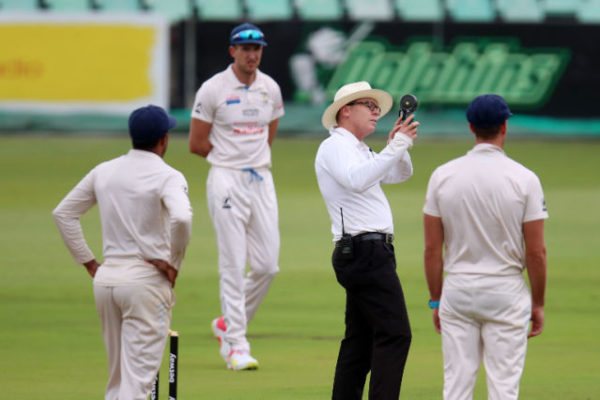 Posted at 07:17h in Dolphins, Domestic, Titans by admin@csa

DURBAN: Rain and bad light ruined the opening day of the 4-Day Domestic Series final after the Hollywoodbets Dolphins and Momentum Multiply Titans were left frustrated in Durban on Thursday.

Only 10 overs were sent down in what is a scheduled five-day match to decide the first-class title – the last one of the franchise era – with the hosts reaching 31 for one in the little over an hour that was possible.

The Dolphins had earlier won the toss and opted to bat at the Hollywoodbets Kingsmead Stadium, where bad light initially delayed the 09h00 start.

When the light did eventually improve, steady drizzle arrived to further delay proceedings, before the field was moved up and prepared for play to begin just after midday.

However, more rain then returned leaving umpires Shaun George and Brad White little choice but to play a waiting game once more.

The players finally got on for a 40-minute session at 14h00 and that was when the home side managed to reach 30 for none thanks in the main to Sarel Erwee (21 not out), before Okuhle Cele (1/14) struck to remove Senuran Muthusamy (7) leg before wicket with what turned out to be the final delivery before tea.

After the resumption, the Dolphins added one run in the two overs that were possible before bad light brought an end to the day.

Play will resume at 09h00 on Friday. A reminder that the match us being broadcast live on SuperSport.