McKenzie impressed as SA U19s hit back in Kimberley 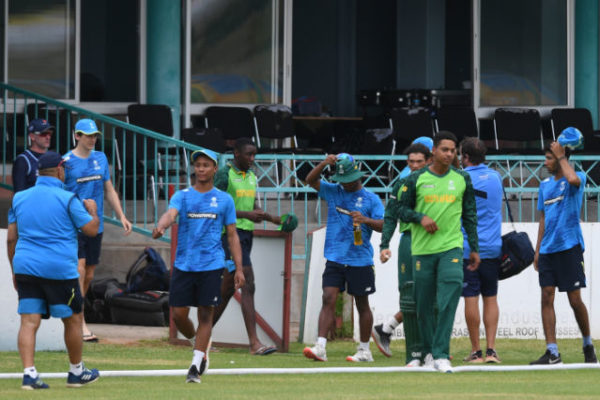 25 Mar McKenzie impressed as SA U19s hit back in Kimberley

KIMBERLEY: The South Africa Under-19 team will take plenty of confidence into their remaining match at the Senior Provincial Men’s Programme after an impressive one-day leg in Kimberley this past week.

This is according to Cricket South Africa’s (CSA) High-Performance Batting Lead, Neil McKenzie, who watched the national juniors overcome Western Province and Northerns in two of their three Pool C 50-over outings.

The results came on the back of a heavy loss in their first full three-day outing when they were rolled over for 41 on their way to an innings defeat to Northerns last week.

“It’s always nice to win and to have two from three was fantastic,” McKenzie said. “It more than the results for us, it’s also about the development of the guys and role clarity.

“We’ve obviously introduced a few new things to work on and take into their games, not just short term but long term as well where we have that tour to the West Indies and the World Cup coming up. It’s always nice to have wins, to develop the guys and teach the guys. I’m really happy with the results in the one-dayers.”

The U19s, who are coached by Shukri Conrad, beat WP by one wicket in a low-scoring game on Sunday. They bowled out their opponents for 130 thanks to four wickets each from Liam Alder (4/16) and Caleb Seleka (4/33), before Michael Copeland struck 47.

After a loss to NC on Monday, the rookies then stunned Northerns by eight wickets on Tuesday – Hardus Coetzer the star with five for 28 to help dismissed the opposition for 102. Dewald Brevis (54*) was then instrumental to help seal the win.

The SA team will now play their final match, a three-day game against Northern Cape, from Friday. The match will complete their 12-day schedule, which is taking place in a bio-secure environment (BSE) in the Northern Cape.

“Going on to the three-day games, it was obviously not great being bowled out for 41,” McKenzie explained. “Kimberley has had a lot of rain. We’ve been playing on the ‘B’ Field, which has been a little bit sporty, but obviously not 41 all out or 130 all out.

“So, the scores have been a little bit disappointing. But we have to take into account that just two or three of our guys had previously played in matches longer than two days. And that experience was lacking, but they will gain that with the more games they play.

“But the one-day results have definitely given the guys a lot more confidence. Hopefully, they can take that into this next game. The exposure has been immense though, you can’t put too great an emphasis on the results, just playing has been great.”