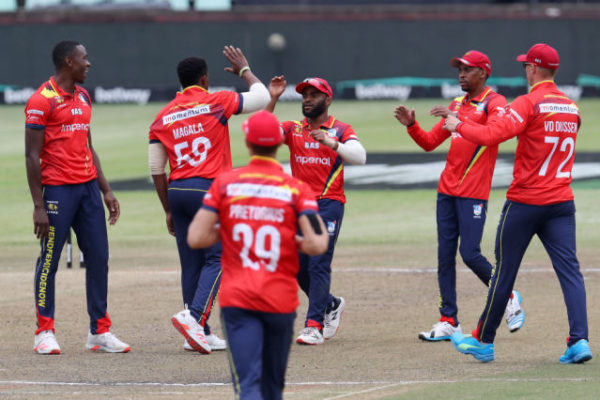 DURBAN: A career-best five-for by Sisanda Magala paved the way for the Imperial Lions to climb top of the Betway T20 Challenge table with a comfortable eight-wicket victory over the VKB Knights in Durban on Tuesday.

The right-arm seamer grabbed five for 20 at Hollywoodbets Kingsmead Stadium as Wandile Gwavu’s charges ruthlessly dismissed their opponents for just 106, before Reeza Hendricks (47) and Temba Bavuma (53* off 47 balls, 3 fours, 1 six) did the bulk of the scoring to help reach the target with 11 deliveries to spare.

It was the third successive win for the Lions and one that vaulted them to the top of the table with a maximum of 12 points, the same number as the Hollywoodbets Dolphins.

Defeat for the Knights all but ends their interest in the competition. They will need to win their final match against the Dafabets Warriors on Thursday and hope several other results go in their favour to have any chance of reaching the play-offs.

However, day five’s afternoon match was all about the Lions and their clinical display on the east coast.

After the Knights won the toss and batted, they were given no chance by their opposition pack of bowlers.

That left the Central Franchise on 15 for three early on, before the dependable Pite van Biljon tried to rebuild with 15.

But both the captain and Grant Mokoena (8) fell to excellent Aaron Phangiso (2/14) in the same over to leave the opposition in further strife on 40 for five.

Farhaan Behardien (28) top-scored for his side and together with Ferisco Adams (23) managed to at least get their side to 100, but Magala proved too good for the Knights’ tail – their innings ending with the final delivery of their 20 overs.

It was the best figures by the 30-year-old and beat his previous best haul of five for 28 for the Warriors against his current team at Port Elizabeth in 2015/16.

However, the 93-run Bavuma-Reeza Hendricks second-wicket partnership killed off any upset hopes with the result then sealed in the penultimate over.