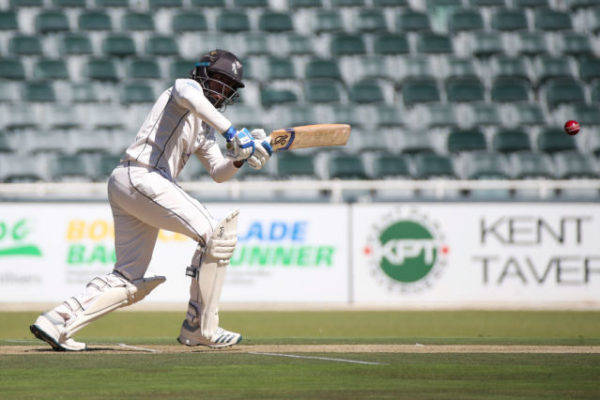 Posted at 14:28h in Dolphins, Domestic, Warriors, Youth by admin@csa

GQEBERHA: Senuran Muthusamy recorded his second half-century of the match to settle any nerves and help the Hollywoodbets Dolphins seal their place in next week’s 4-Day Domestic Series final with a comfortable seven-wicket win over the Warriors at St George’s Park in Gqeberha on Friday.

The all-rounder, who struck 52 in the first innings, finished unbeaten on 57 (107 balls, 8 fours) second time around to wrap up a big result for the KwaZulu-Natal side.

Coupled with the VKB Knights losing to the Six Gun Grill Cape Cobras, they managed to overhaul the Central Franchise outfit and take the No. 1 position in Pool A after the completion of the regular season.

Their final points tally of 126.08, far superior to Pool B winners the Momentum Multiply Titans, means that Imraan Khan’s charges will now go on to host a five-day final that will take place in Durban from next Thursday.

It also means that the Dolphins have qualified for every final in 2020/21. They were joint Momentum One-Day Cup winners with the Imperial Lions after rain washed out the final, while they lost the Betway T20 Challenge decider to the same opponents last month.

Their route to the red-ball final came after they beat the Lions last week and then made a strong start to the game against the Warriors where they ruthlessly dismissed the hosts for 124 in the first innings.

After responding with 358 and then bowling out the Eastern Cape franchise for 345 on Thursday, it left them a small target of 112 for victory.

They resumed at eight for none on the final morning, but lost Sarel Erwee (5) and Keegan Petersen (4) to Ayabulela Gqamane (2/20) cheaply.

That left them on 34 for two, before Muthusamy settled nerves with his stand of 54 with Marques Ackerman (22).

The captain did fall with the score on 88, but Khaya Zondo (10*) helped complete the job and seal an emphatic win.