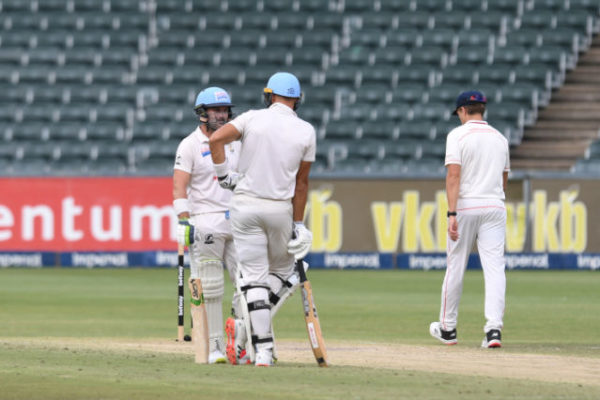 Posted at 07:31h in Domestic, Titans by admin@csa

JOHANNESBURG: Momentum Multiply Titans openers, Dean Elgar and Aiden Markram, both hit half-centuries to briefly threaten the Imperial Lions before their wickets all but ended those hopes as the two teams settled for a draw on the final day of their 4-Day Domestic Series derby in Johannesburg on Friday.

The pair put on 125 for the opening wicket before both perished in a chase of 313, after which the two captains shook hands at the tea interval.

It meant both teams walked away with a shared result, with the outcome more than enough for the visitors to progress to next week’s five-day final as Pool B winners. They will play Pool A winners, the Hollywoodbets Dolphins, in Durban from Thursday.

Earlier, the home side resumed the final morning on 247 for six, eventually declaring on 308 for nine. Wiaan Mulder finished unbeaten on 56 off 86 balls (6 fours), while new Proteas limited-overs call-up Lizaad Williams ended as the pick of the bowlers with four for 74.

That left the Titans a chaseable target in well over 80 overs. And they began strongly, thanks to the imperious Markram, who continued his staggering form this season that took him to an overall tally of 945 runs this season.

The young opener was eventually dismissed by Beuran Hendricks (1/45). Bjorn Fortuin (1/12) struck again not long after. Neil Brand (9) and Heinrich Klaasen (4) were in no hurry thereafter, batting through to the early finish.