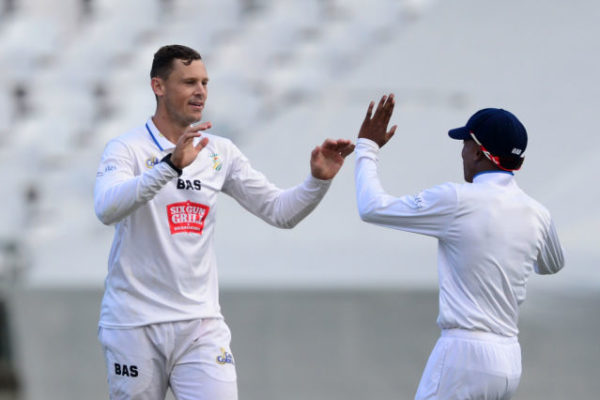 Posted at 07:33h in Cape Cobras, Domestic by admin@csa

CAPE TOWN: George Linde claimed career-best figures to help the Six Gun Grill Cape Cobras finish off the VKB Knights and seal a first 4-Day Domestic Series win of the campaign in their final match of the season when they won by a record innings and 215 runs in Cape Town on Friday.

The Proteas spinner ended with figures of seven for 29 as the Central Franchise, in pole position to host and feature in next week’s final prior to the game, were emphatically beaten to miss out on the decisive game that will now be contested between the Hollywoodbets Dolphins and the Momentum Multiply Titans in Durban from next Thursday.

The winning margin was also the biggest for the Cape side in their history and remarkably earned them a first first-class win since they beat the Titans at Oudtshoorn way back in January 2019. They failed to win a single game last season and faced a repeat scenario this year until this victory in the Mother City.

It was all built around Pieter Malan’s record-breaking 264 that set them on their way, with Ashwell Prince’s side entering day four of the game needing just three wickets to wrap up proceedings.

They started with a bang thanks to Linde, with the slow left-armer making a breakthrough in just the fourth over of the morning when he took out Duan Jansen on five to complete his 14th career five-wicket haul.

After some brief resistance by Alfred Mothoa (8), Linde removed the medium-pacer and Mbulelo Budaza (0) in successive deliveries to seal the resounding win, one that beat the Cobras’ previous win of an innings and 166 runs versus the Dolphins at Paarl in 2010/11.

Linde’s figures also beat his seven 64 taken against the Imperial Lions at Potchefstroom in 2019/20.

Farhaan Behardien was left unbeaten on 48 as the Knights were left to rue what might have been – Allan Donald’s team bowled out for 127 in their second innings.