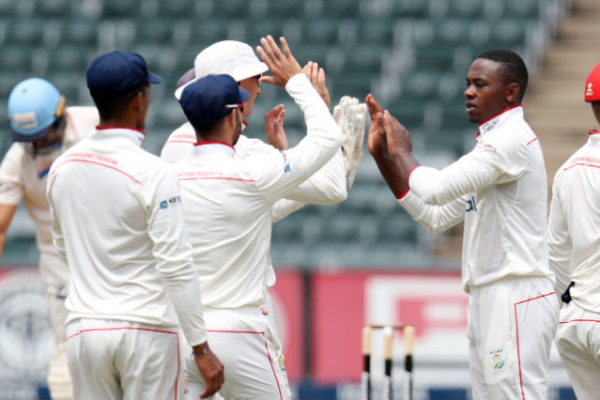 JOHANNESBURG: Kagiso Rabada and Lutho Sipamla finished with five wickets apiece before half-centuries from Ryan Rickelton and Reeza Hendricks helped the Imperial Lions hit back strongly on day three of their 4-Day Domestic Series derby against the Momentum Multiply Titans in Johannesburg on Thursday.

The Proteas fast-bowling duo grabbed five for 51 and five for 37 respectively as the visitors were dismissed for just 202 – 100 of those runs coming from the bat of Aiden Markram, who notched up his fifth century in 11 innings this season.

Despite that effort from the in-form opener, the hosts still claimed a surprise four-run lead that looked far from probable at the halfway stage of the game.

A busy day at the Imperial Wanderers Stadium began with the Titans losing their last five wickets for 15 runs, including Sipamla claiming four wickets in an over right at the end.

They started out proceedings on 169 for five and initially went well thanks to Dayyaan Galiem (17) and Markram.

But once the stand was broken by Rabada for his fifth strike of the innings and 12th career five-for, Mandla Mashimbyi’s side slipped from 187 for six to 202 all out.

Sipamla, who secured his third career five-wicket haul, took out Thando Ntini (4), Markram, Tabraiz Shamsi (0) and Okuhle Cele (0) all in the 75th over – the South Africa opener out after bagging his 17th career ton.

The Lions lost Dominic Hendricks (1) early in the chase, but Rickelton and Reeza Hendricks added 81 for the second wicket, before the former fell to Lizaad Williams (2/42).

The latter continued to go strongly, before he became the last wicket to fall later in the day, although Wiaan Mulder (35*) kept the Lions in a good position by the close.