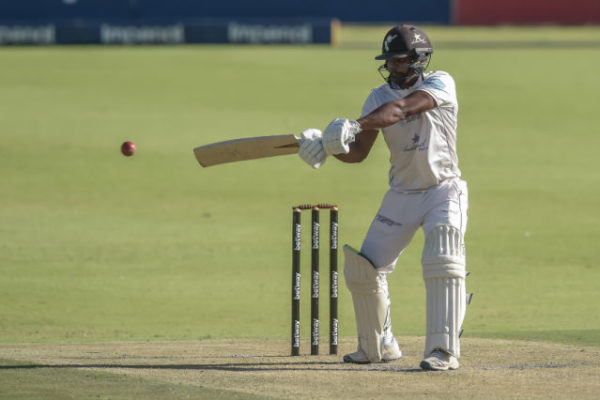 Posted at 07:54h in Dolphins, Domestic by admin@csa

GQEBERHA: Khaya Zondo’s 12th career first-class century handed the Hollywoodbets Dolphins a big advantage after the second day of their 4-Day Domestic Series encounter against the Warriors at St George’s Park in Gqeberha on Wednesday.

That gave them a lead of 234 at the changeover, before an attacking opening stand of 88 between Eddie Moore and Gihahn Cloete helped the Eastern Cape franchise hit back to reach stumps trailing by 146.

It was a worrying end to the day for the Dolphins as they search for victory which will guarantee them a place in next week’s final.

They started the morning on 67 for two and were initially bogged down despite Senuran Muthusamy’s 52 off 122 balls (7 fours).

Both he and overnight partner Marques Ackerman (19) fell to the pace of Stefan Tait (2/74), before Ruan de Swardt (10), Eathan Bosch (21) and Mangaliso Mosehle (4) all departed in quick succession as the Dolphins faltered at 194/7.

It left the visitors in danger of failing to capitalise on their early match advantage.

However, Zondo found a foil in the in-form Keshav Maharaj (66 off 86 balls, 10 fours) as the pair added 132 for the eighth wicket.

Daryn Dupavillon (23* off 21 balls) then ensured there was a strong finish for the Dolphins as they claimed a huge lead.

Moore (42*) and Cloete (39*) then enjoyed a promising 22 overs together to help their side finish the day strongly.