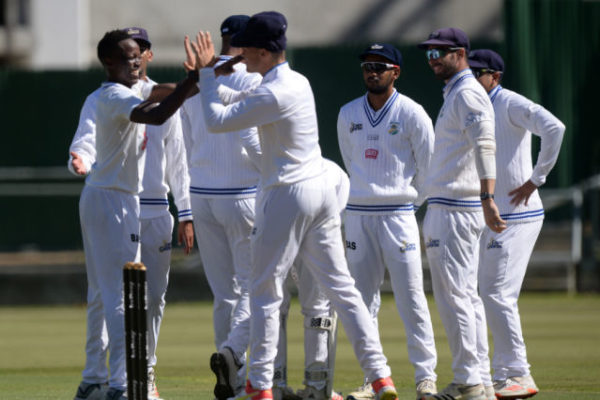 Posted at 09:01h in Domestic, VKB Knights by admin@csa

After winning the toss and batting at Sig Gun Grill Newlands, the visitors were bowled out for just 181 as Moreki claimed four for 54 and fellow seamer Burger grabbed four for 64.

Opener Malan then struck 51 off 96 balls (6 fours, 2 sixes) to ensure that the home side completed a strong day in control on 84 for one, trailing by only 97.

It was a bitter blow to the Central Franchise, who narrowly topped Pool A from the Hollywoodbets Dolphins heading into the final round of round robin fixtures. They will now need to bounce back strongly on day two to keep alive their chances of reaching next week’s five-day final.

For the Cobras, their start to the game raised hopes of a first win of what has been a winless campaign thus far.

Their bowlers impressed from the outset after reducing the Knights to 36 for four inside the first 13 overs – Jason Smith (2/19) claiming two of those wickets, along with Burger and Moreki, who removed the free-scoring Jacques Snyman for 26.

Patrick Kruger (24) then helped rebuild as the visitors progressed to 82, before another flurry of wickets saw them slump to 112 for eight.

Amongst those to fall during that collapse was top-scorer Raynard van Tonder (47). Duan Jansen (23) and Alfred Mothoa (34) at least helped their side by putting on 46 for the ninth wicket, but they were all out in 63.4 overs.

Jansen (1/17) then claimed the early wicket of Isma-eel Gafieldien (2), before Malan and Zubayr Hamza (29*) put on 73 to take the Cobras to stumps in control.