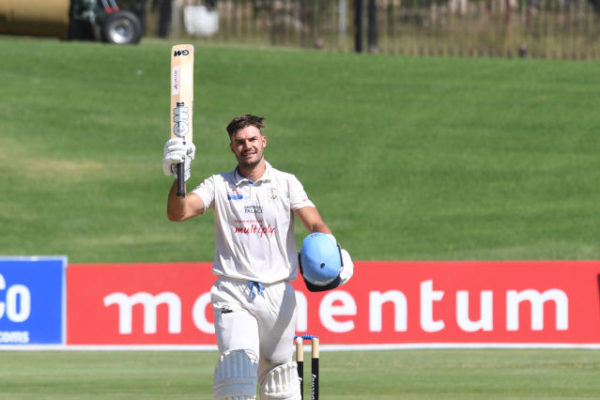 Posted at 09:13h in Domestic, Titans by admin@csa

CENTURION: A maiden career double century by Aiden Markram ensured that there were no final-day jitters by the Momentum Multiply Titans as their 4-Day Domestic Series match against the VKB Knights ended in a draw at SuperSport Park in Centurion on Wednesday.

Those performances essentially denied the visitors a chance to press on for a victory they so desperately craved and one that would have given them a huge advantage in the race to reach the final.

In the end they had to be content with far fewer points that took them to a total of 102.08, narrowly ahead of the Hollywoodbets Dolphins (100.92) ahead of the last round of round-robin games next week. The Titans (86.84) remained top of their pool.

Having resumed on 162 for none at the start, the two national openers extended their stand to a franchise record 213. Their partnership overhauled the 203 that was twice set – once by Markram and Heino Kuhn (2016/17) and the second time by Vusi Mahlangu and Wesley Marshall (2019/20).

After Elgar and Neil Brand (0) fell in quick succession, Makhanya helped add a further 141 for the third wicket, with Heinrich Klaasen, a Covid-19 substitute for Theunis de Bruyn, finishing unbeaten on 14.

The latter came into contact with someone who is infected with the virus, although he himself tested negative afterwards. His removal from the match was a precaution, as per government regulations for an individual who has come into contact with a known case.

As for Markram, he went on to cross the 200 mark for the first time in his career with his 16th career ton. His previous highest score was 182 recorded for Northerns against Western Province at Cape Town in 2015/16.

The full 4-Day Domestic Series tables are available on https://cricket.co.za/tournament/1807/4-Day-Domestic-Series