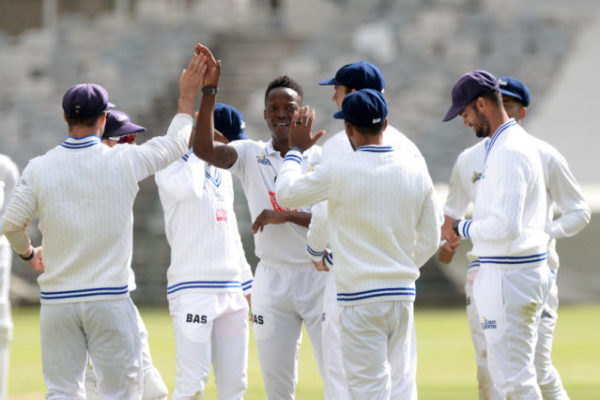 Posted at 09:21h in Cape Cobras, Domestic by admin@csa

CAPE TOWN: Tshepo Moreki and Akhona Mnyaka claimed three wickets each before defiant lower-order batting coupled by bad light held up a victory push by the Six Gun Grill Cape Cobras at stumps on day three of their 4-Day Domestic Series encounter against the Warriors in Cape Town on Tuesday.

The visitors were on 259 for nine when proceedings prematurely ended – and the difference between the two teams still a substantial 254.

Ayabulela Gqamane (55 off 92 balls, 8 fours, 2 sixes) and Marco Jansen (50 off 85 balls, 5 fours, 2 sixes) were the two batsmen that rescued the Warriors after their half centuries helped them recover from 137 for seven at one stage to end the day in a far more respectable position.

However, they will still have plenty of work to do in order to salvage a draw on day four when the Cobras will be pursuing a first win of the season in what is the penultimate round of the 2020/21 campaign.

The Cape side had started day three primely placed with their visitors on 32 for one. And they made plenty of early inroads thanks to Mnyaka (3/41) and Moreki (3/44).

Jon-Jon Smuts (20), nightwatchman Tshepo Ntuli (25), captain Yaseen Vallie (25) and Rudi Second (21) all got starts that they failed to capitalise on, and with the Cobras’ bowlers chipping away, the Eastern Cape side found themselves in deep trouble in the 41st over when they lost their seventh wicket.

But Gqamane and Jansen added 56 for the eighth wicket followed by 50 between the latter and Anrich Nortje (26*).

Bad light then intervened meaning just 70 overs were sent down on day three.