Rabada proud to be a Lion 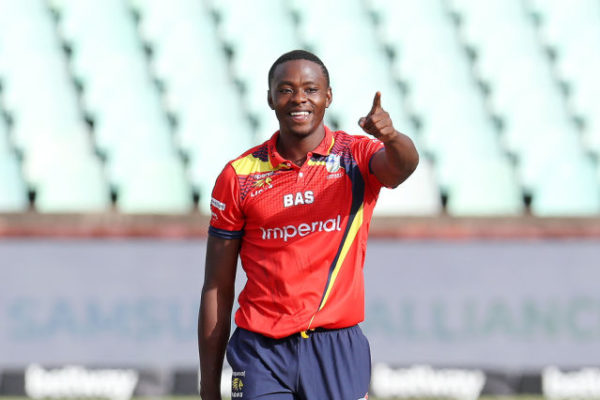 01 Mar Rabada proud to be a Lion

Posted at 10:11h in Domestic by admin@csa

The Johannesburg-based outfit claimed the 20-over title when they overcome the Hollywoodbets Dolphins by four wickets in a low-scoring final in Durban.

Rabada was the star with the ball, claiming three for 12 during an impressive four-over spell that helped restrict the hosts to just 107, before the Lions chased down the target with six deliveries to spare.

“It feels good to win this title,” the Proteas star said. “First of all, I really wanted to play, to be involved and to find some good form. Also, to be playing for the Lions… I haven’t played for them in quite a while. It’s nice to be involved where it all started and what better way to end than with a trophy.

“It’s been amazing playing with my Lions team-mates this past week, it’s been a really chilled environment and when we did get onto the field, we delivered. It was a great environment to be part of.”

The entire competition was staged in a bio-secure environment in Durban, with Rabada amongst a whole host of nationally contracted players that were available to feature.

The 25-year-old played six out of seven matches for his side, claiming nine wickets at an average of 15.33. Team-mate Sisanda Magala was the most successful bowler for the Lions, bagging 13 wickets. Both were part of a star-studded available to coach Wandile Gwavu.

Victory in the final was undoubtedly set up by the bowlers and Rabada added: “It was definitely set up by the way we bowled. We have to give credit to the bowlers, they were excellent in a game where they needed to be at their best.

“We did that and restricted them to 107, which means we’re making it a lot easier. There were some nerves towards the end, but I think the good work done earlier in the game made it easier for us to get over the line.”

Lions captain Temba Bavuma was equally impressed by their performances with the ball.

“I’m obviously super proud of the boys and their effort,” he stated. “It’s been an excellent campaign for us. We obviously came here with the trophy in sight and that’s what we managed to achieve.

“It was an all-round performance with the bowlers obviously setting the tone for us, they’ve been the heartbeat for us in each game, and the batters then coming right closer to the end of the tournament.”

Apart from their bowlers taking the plaudits, their batsmen too shone – and in particular top run-scorer Reeza Hendricks, who ended with a tournament-leading aggregate of 257 in seven innings.

But the Lions did wobble in their low chase on Sunday, although Bavuma defended their display with the bat.

“It was a final and there was no easy route here,” he concluded. “We played against the Dolphins and they’re a competitive outfit. I guess we weren’t expecting things to get that close, but we still had confidence in the guys. It’s a four-wicket victory in the end, it was close but it is a four-wicket win.

“It was a final and you expect your big guns to step up. The beauty about our team is that responsibility is not shirked, and everyone knows that when it’s their day they need to make it count for the team and that’s been the mantra for our team.”