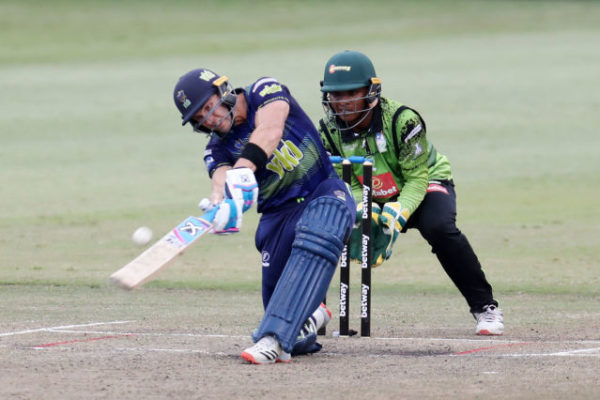 Posted at 10:37h in Domestic, Titans, Warriors by admin@csa

DURBAN: Raynard van Tonder struck the highest score of the Betway T20 Challenge thus far but it was not enough as the VKB Knights were beaten by the Dafabet Warriors in their final group phase match at Hollywoodbets Kingsmead Stadium in Durban on Thursday.

The former South Africa Under-19 captain plundered an unbeaten 81 off 57 balls (6 fours, 3 sixes) in a chase of 158 that ended with the Central Franchise finishing on 143 all out from their 20 overs, handing their Eastern Cape opponents victory by 14 runs.

The Knights needed to win the game with a bonus point to stand a chance of reaching the play-offs, but instead it was the Warriors who walked away with the four points that took them up to third on the table.

They now occupy the final qualification spot and must hope the Momentum Multiply Titans are beaten by leaders the Hollywoodbets Dolphins if they want to progress to the business end of the tournament, which is being played in a bio-secure environment (BSE) in Durban.

In what was a high-stakes game on the east coast, Allan Donald’s won the toss and chose to field first, although they struggled to keep their opponents in check early on.

Jon-Jon Smuts (33) and Gihahn Cloete (22) gave their side a fast start by putting on 53 for the first wicket inside the powerplay overs, before Mbulelo Budaza (3/18) and Shaun von Berg (2/27) excellently dragged things back.

They took out both batsmen and Matthew Kleinveldt (2/17) ran through the middle order to leave the Warriors limping on 66 for four.

Lesiba Ngoepe managed to change the tempo again with his 41 off 30 balls, while some lusty late blows by Anrich Nortje (14*) and Ayabulela Gqamane (15) lifted the Robin Petersen’s side to 157 for eight.

For the Knights to have any chance of getting through they needed to score the runs in 16 overs, but they suffered some big blows early on to all but end their chances.

However, Van Tonder, who beat his previous best score of 76* for Free State against Gauteng at Benoni in 2019/20, refused to throw in the towel. He found company in Von Berg (16) with the pair adding 40 for the seventh wicket, but scoreboard pressure ultimately proved too much.