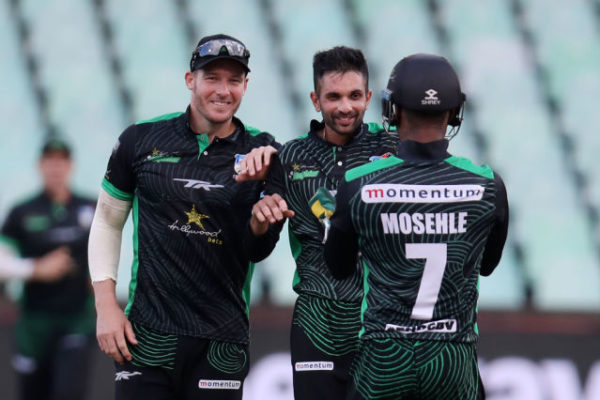 Posted at 10:40h in Dolphins, Domestic by admin@csa

DURBAN: Keshav Maharaj lead another sublime bowling display by the Hollywoodbets Dolphins as they climbed to the top of the Betway T20 Challenge table with a thumping 41-run win over the Imperial Lions in Durban on Wednesday.

The home captain, the most economical bowler of the competition thus far, claimed an immaculate one for 10, and together with Prenelan Subrayen (3/18) – the pair conceding a total of 28 in eight overs – helped dismiss the opposition for 110 at Hollywoodbets Kingsmead Stadium.

This was in reply to a total of 151 for four that was built around David Miller’s unbeaten 56 off 38 balls (3 fours, 3 sixes), a total that proved too big for the Lions’ formidable line-up as they slipped to a first loss of the campaign.

The Dolphins on the other hand continued their march by making it four wins from four.

But it did not all go their way after they won the toss and batted, with a good performance by Wandile Gwavu’s side early on leaving the locals struggling on 91 for four after nearly three-quarters of their innings.

Sarel Erwee (7), Ruan de Swardt (14), Keegan Petersen (35) and Khaya Zondo (13) were the four to fall in the first 15 overs, before Miller and Mangaliso Mosehle (18*) added an unbroken 60-run fifth-wicket partnership that helped their side to a competitive total.

The visitors’ reply was a struggle, thanks in the main to Maharaj’s miserly start that saw the Lions score just 32 in the powerplay overs.

Added to that was the cheap dismissals of Ryan Rickelton (1), Reeza Hendricks (14) and Temba Bavuma (11) and the Lions got to the ninth over on 41 for three.

Rassie van der Dussen was the man holding it all together at the other end with 33, but once he fell, his team collapsed in a heap.

They did not last much longer thereafter and were all out 19.3 overs.

Nonetheless they remained second on the table with 12 points, four ahead of the only side that still can catch them, the Momentum Multiply Titans (8).

For the Dolphins, they moved to 17 points. The Lions are the only team that can overtake them, but they will need to win their final game with a bonus point to have a chance of finishing top.