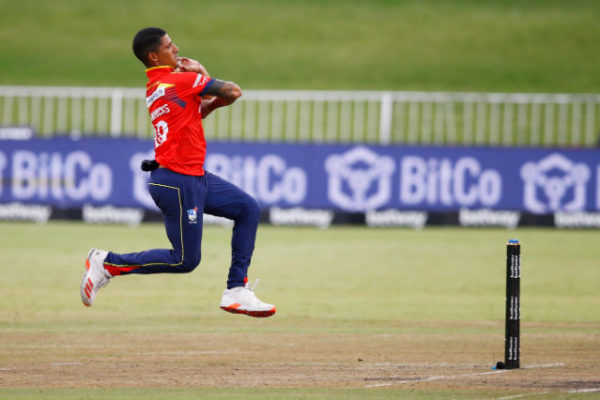 Posted at 10:56h in Domestic, Imperial Lions by admin@csa

DURBAN: Beuran Hendricks lead a dominant bowling performance to help the Imperial Lions oust their Jukskei rivals the Momentum Multiply Titans in their high-profile Betway T20 Challenge derby in Durban with an 18-run win on the Duckworth/Lewis Method on Monday.

The Proteas seamer claimed a miserly two for seven in three exceptional overs as the Centurion-based were restricted to 112 for eight in pursuit of 131 from 15 overs.

There were also two wickets each for Bjorn Fortuin (2/21) and Dwaine Pretorius (2/29), the Titans just not allowed to gain any rhythm during their chase.

The Lions batted first after winning the toss and reached 124 for four in 16.2 overs when rain brought a premature end to their innings.

The Johannesburg-based side had Reeza Hendricks (39) and Rassie van der Dussen (37*) to thank for getting them to that position after a wicket each for Simon Harmer, Lungi Ngidi, Lizaad Williams (all 1/19) and Tabraiz Shamsi (1/24) at Hollywoodbets Kingsmead Stadium. Paceman Ngidi’s dismissal of Dwaine Pretorius raised his 100th T20 wicket in his 73rd match in the format.

Rain then did deny Wandile Gwavu’s side the chance of a strong finish, with their total revised to 131.

The Titans’ chase began fairly as they reached 41 for two in the sixth over, before the wheels came off – the early wickets to fall being Henry Davids (3) and Aiden Markram (8).

They then lost four wickets for 14 runs to slump woefully to 55 for six, Fortuin landing two of those blows.

Junior Dala (21), Simon Harmer (17) and Williams (11*) at least denied the Lions the satisfaction of a bonus point, although the Titans did end with their joint-lowest score in the fixture.

It was also a first loss of the campaign for Mandla Mashimbyi’s side, with their rivals making it two wins from two.