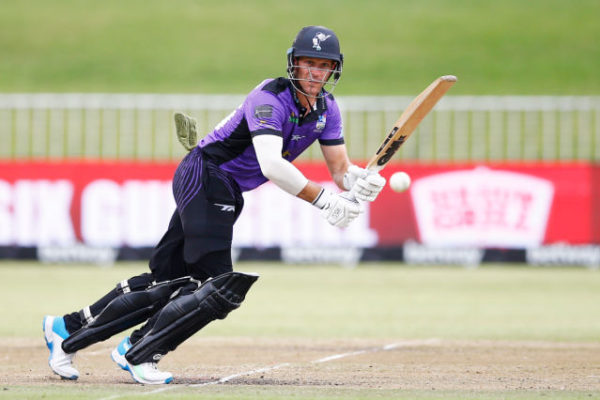 Posted at 11:05h in Dolphins, Domestic by admin@csa

DURBAN: A 92-run opening partnership between Sarel Erwee and Keegan Petersen helped the Hollywoodbets Dolphins make it three wins from three to lead the Betway T20 Challenge after the third day of action thanks to a three-wicket victory on the Duckworth/Lewis Method over the Dafabet Warriors in Durban on Sunday.

Both men struck half-centuries, with left-hander Erwee blasting four huge sixes and two fours on his way to 52 off 37 balls, while right-hander Petersen recorded a more measured 58* (56 balls, 3 fours, 1 six) in what proved to be a relatively easy chase of 144 at Hollywoodbets Kingsmead Stadium.

Earlier, the Eastern Cape franchise had captain Sinethemba Qeshile to thank after he hit an unbeaten 47 off 38 deliveries after winning the toss and batting.

The Warriors just could not get going during their innings following another stellar performance with the ball by Keshav Maharaj, who returned figures of none for 12 in four overs, two of which were remarkably maidens.

The Proteas spinner opened the bowling once again and put the brakes on from the outset, with his tight bowling leaving the Warriors on just 61 for three at halfway.

But a 71-run partnership between Qeshile and Jon-Jon Smuts (29) got the innings going, before late wickets cut short that momentum as the Warriors finished with 143 for five.

The Dolphins’ reply was outstanding. Erwee blasted his eighth career half-century and Petersen his third in what was the 2020/21 competition’s biggest partnership for all wickets to date.

When the stand was eventually broken in the 13th over by Aya Gqamane (1/15) the local side needed just 52 off 47 balls. That wicket followed by the run out of Senuran Muthusamy (6) did open the door, however, for Robin Peterson’s side.

But they then dropped two crucial catches just before the rain came, which ultimately proved costly as the Dolphins held on to climb top of the table.