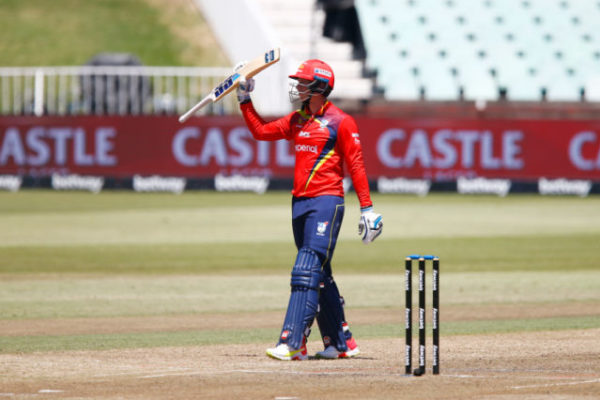 Posted at 14:39h in Domestic, Imperial Lions by admin@csa

DURBAN: A sizzling half-century in the Durban heat from Rassie van der Dussen together with seven shared wickets between Kagiso Rabada and Sisanda Magala helped the Imperial Lions make a strong start to the Betway T20 Challenge with a four-wicket win over the Dafabet Warriors on Saturday.

Wandile Gwavu’s team, champions of the competition when it was last played, bowled first after losing the toss but managed to dismiss their opponents for 157 at Hollywoodbets Kingsmead Stadium.

Seamer Magala was their most successful bowler with four for 37, but Proteas speedster Rabada was the man that impressed most with his three for 23.

National team-mate Van der Dussen then blasted 64 off 41 balls (3 fours, 4 sixes) to lead the Lions’ charge that ended with them crossing the line with four deliveries to spare.

The margin of victory could have been even greater for the Johannesburg-based side had they not went through a wobble late during the chase.

They were in control for most of the contest, though, especially after pulling the Warriors back following a fast start provided by Jon-Jon Smuts (14) and Gihahn Cloete (18).

But from 34 for none after four overs, Rabada’s pace then rattled the Eastern Cape side as they lost quick wickets to slump to 36 for three.

Wihan Lubbe (22), who was rattled by a bouncer from the paceman that struck his head, and captain Sinethemba Qeshile (33) did lead the recovery – the Warriors reaching 107 for four at one stage.

But they fell to the excellent Bjorn Fortuin (1/18) and Beuran Hendricks (1/29) respectively, before Magala returned to mop up the tail, the innings ending with the 10th wicket falling from the final delivery.

The Lions lost Ryan Rickelton (5) and Reeza Hendricks (11) early, before Temba Bavuma (40) and Van der Dussen rebuilt with a 64-run second-wicket stand. The latter and Delano Potgieter (17) followed that by adding 58 for the next wicket to put the chase well on track.

However, the two set men fell to Aya Gqamane (3/20) to threaten a late twist, but Fortuin struck nine quick runs to ensure there was no Warriors comeback as Gwavu’s men sealed victory early in the final over.