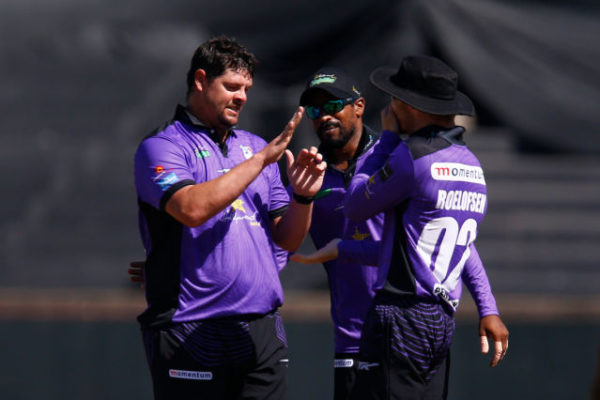 Posted at 11:17h in Dolphins, Domestic by admin@csa

DURBAN: Robbie Frylinck starred with bat and ball as the Hollywoodbets Dolphins made it two from two with a comfortable four-wicket victory over the VKB Knights on day two of the Betway T20 Challenge at Hollywoodbets Kingsmead Stadium in Durban on Saturday.

The veteran all-rounder first excelled with the ball by claiming two for 11 that helped his team restrict their opponents to 144 for five in their 20 overs.

Frylinck then struck an important 24 off 15 balls following a nervy period for the local side, which ultimately ensured they got to their target with 11 deliveries to spare.

It was a result that propelled the coastal side to the top of the table, with the Central Franchise remaining winless after two games so far.

After winning the toss and batting, the Knights were in trouble from the get-go, losing their first four wickets inside the opening 6.3 overs.

Captain Keshav Maharaj (2/18), fresh from claiming a career-best four-for on day one of the competition, struck twice in the first three deliveries of the game to dismiss Patrick Kruger and Andries Gous both for ducks, with Frylinck then taking out Jacques Snyman (6) and Farhaan Behardien (5).

That made for a dreadful start for Allan Donald’s charges, but they only improved from there thanks to their own skipper Pite van Biljon as he recorded his seventh career half-century on his way to an unbeaten 72 off 54 balls (3 fours, 4 sixes).

Adams (2/26) did manage to break through in the sixth over by enticing an edge from the former, while Senuran Muthusamy (8) and the latter followed in quick succession.

But Khaya Zondo, who scored a half-century in the Dolphins’ win over the Six Gun Grill Cape Cobras on Saturday, hit an unbeaten 35, and together with David Miller (29), settled nerves.

Alfred Mothoa (2/37) gave the Knights hope by removing Miller and Mangaliso Mosehle (1), but Frylinck and Zondo put on 55 for the sixth wicket to take their side to a solid win.