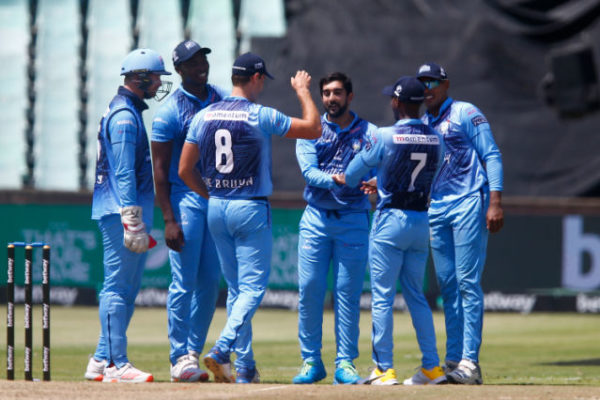 Posted at 16:33h in Domestic by admin@csa

DURBAN: Tabraiz Shamsi lead a dynamic all-round bowling performance before Heinrich Klaasen composed nerves with an unbeaten half-century to fire the Momentum Multiply Titans to a six-wicket victory over the VKB Knights in the Betway T20 Challenge opener in Durban on Friday.

On a sweltering morning at Hollywoodbets Kingsmead Stadium – where the 2020/21 tournament is being hosted in a bio-secure environment – the Central Franchise won the toss and opted to bat first, only to be steamrolled for 116 inside 17 overs.

Spinner Shamsi was the most successful of the bowlers with three for 20 in his four overs, but the IPL’s multi-million rand man Chris Morris showed his worth by claiming one for 10 in 3.2 overs. There were also two wickets apiece for Lungi Ngidi (2/19), Lizaad Wiliams (2/20) and Dayyaan Galiem (2/25) in what was a fine display with the ball by the Titans.

Migael Pretorius (3/26) then rocked the top order of the Centurion-based side to leave them on seven for three, before captain Klaasen belted 54* off 40 balls (3 sixes, 3 fours) to lead his side home with 17 deliveries to spare.

However, the Knights only have themselves to blame after they flew out of the blocks to reach 84 for two in the ninth over thanks to Andries Gous (35) and Pite van Biljon (33). Patrick Kruger also struck 22 earlier.

But it all went horribly wrong from there as they lost their remaining eight wickets for just 32 runs to be dismissed in 16.2 overs.

Pretorius then threatened to alter a relatively straightforward-looking script with his double strike up front, his wickets including Theunis de Bruyn (0), Aiden Markram (5) and Sibonelo Makhanya (0).

But Dean Elgar hit an assured 37 during a stand of 76 with Klaasen, who then finished the job alongside Morris (21*).