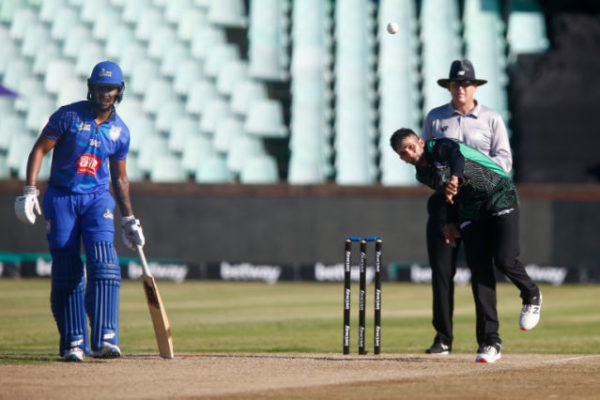 Posted at 16:23h in Dolphins, Domestic by admin@csa

DURBAN: A career-best four for 15 by Keshav Maharaj upstaged Siyabonga Mahima’s debut hat-trick as the Hollywoodbets Dolphins made a strong start to their Betway T20 Challenge campaign with a 14-run win over the Six Gun Grill Cape Cobras in Durban on Friday.

There was also a vital ninth career half-century from Khaya Zondo that set the hosts up for a total of 155 for eight after they won the toss and opted to bat first at Hollywoodbets Kingsmead Stadium.

The right-hander was in explosive form, plundering 59 off 39 balls (6 fours, 2 sixes), but was the second of rookie leg-break bowler Mahami’s hat-trick victims – the 24-year-old finishing with the dreamy figures of four for 18 in three overs.

But he was then upstaged by Proteas slow left-armer Maharaj, who beat his previous best figures of three for seven that he claimed playing for KwaZulu-Natal against Namibia at Chatsworth in 2012/13, as the Cobras faded away to end on 141 for seven.

That handed Imraan Khan’s side a positive start to the campaign, which is being hosted in a bio-secure environment in the coastal city. The match also concluded the day one programme, which was a double-header that began with the Momentum Multiply Titans thumping the VKB Knights by six wickets earlier in the day.

The Dolphins too impressed on day one, although it was their bowlers who shone more following a modest display with the bat.

Only Zondo managed to find his range after the hosts kept losing wickets regularly. They had two run-outs in the first nine overs as Grant Roelofsen (0) and David Miller (16) failed to make their ground.

Corbin Bosch (1/31) and Mahami also struck to leave the Dolphins on 63 for four just after half way.

Zondo, though, proved to be the dangerman as he tucked into the bowling, with the Cobras’ 25 extras proving to be the second top-scorer.

Mahami did make merry at the end – all his victims caught in the outfield trying to go big – as the youngster ended with a four-for.

The chase began well for the Cape side as they progressed to 70 for one thanks to new captain Tony de Zorzi (39) and Kyle Verreynne (29), the pair putting on 69 for the second wicket.

But they then lost four wickets for four runs to all but drop out of the hunt, before Christiaan Jonker’s unbeaten 41 add respectability to the scorecard.