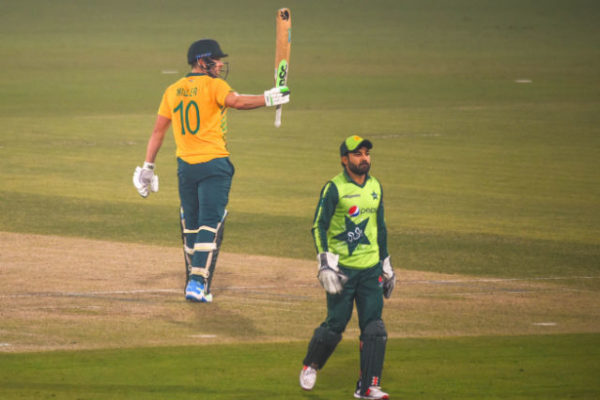 LAHORE: A batting spectacular by David Miller was not enough for the Proteas as they slipped to a four-wicket defeat in the final Twenty20 International against Pakistan and with it surrendered the series 2-1 in Lahore on Sunday.

Miller delivered a magnificent exhibition of hitting by plundering an unbeaten 85 off 45 balls (5 fours, 7 sixes) as South Africa recovered from 65 for seven to post a competitive 164 for eight at the Gaddafi Stadium.

Tabraiz Shamsi then produced a remarkable spell of four for 25 to leave the hosts struggling on 137 for six after 17 overs, before Hasan Ali clubbed 20 off just seven balls to lead his side to victory with eight deliveries to spare.

The result brought the curtain down on the Proteas’ tour to the Asian country – ending a series in which they also showed plenty of promise despite most of their regular names being absent.

In the final game, stand-in captain Heinrich Klaasen lost the toss at the start and his team was asked to bat first by counterpart Babar Azam.

However, the batting unravelled in woeful fashion with debutant Zahid Mahmood (3/40) and Mohammad Nawaz (2/13) running riot.

Only Janneman Malan (27) amongst the top five managed to find any rhythm – the early wickets leaving South Africa in real danger of being bowled out for less than 100.

But Miller and Bjorn Fortuin (10) put on 41 for the eighth wicket, before a record unbroken ninth-wicket partnership of 58 between the former and Lutho Sipamla (8*) launched the tourists to a 165 target.

Miller blazed four sixes in the final over alone, with his innings also completing a third T20I half-century.

It was then over to the bowlers, who initially struggled against Pakistan’s star batsman of the series, Mohammad Rizwan (42).

Along with Haider Ali (15), the pair put on 51 for the opening wicket to put their side firmly in the driving seat.

Shamsi’s introduction in the seventh over threatened to alter course of the game after he struck with his first ball to take out Haider.

Two more strikes in his next two overs left the Pakistanis on 84 for three by the end of 11th over and the game back in the balance.

And when Dwaine Pretorius (1/33) got rid of Babar for 44 it was advantage South Africa.

Shamsi tilted the scales even further in favour of his side by claiming his fourth wicket for a career-best haul and Bjorn Fortuin (1/30) added to that with the wicket of Faheem Ashraf (10).

It left the Proteas well-placed as the hosts needed 28 from the last three with two new men in the middle.

However, Hasan and Nawaz (18 off 11 balls) were destructive when it counted most sealing victory with more than an over to spare.