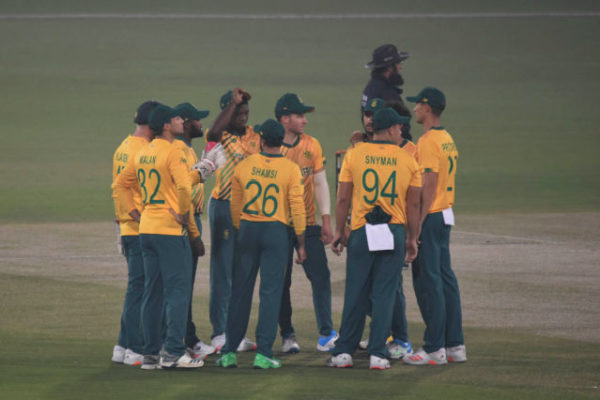 LAHORE: Reeza Hendricks struck an attacking half-century but that was outdone by Mohammad Rizwan’s maiden Twenty20 International ton as Pakistan edged out the Proteas by three runs in the series opener at the Gaddafi Stadium in Lahore on Thursday.

The home wicketkeeper, fresh from recording a maiden Test hundred for the Asian side earlier this week, clubbed seven sixes and six fours in an unbeaten 104 off 64 balls.

His effort helped the hosts amass 169 for six after they lost the toss and were asked to bat first by the visitors.

In reply, Hendricks scored 54 off 42 balls (8 fours) and Janneman Malan managed 44, but it was not enough – with South Africa ending just short on 166 for six.

Mark Boucher’s side, without several of their regular star for the three-match sequence, made a bright start to the game when Bjorn Fortuin (1/25) expertly ran out Pakistan’s captain Babar Azam for a second-ball duck.

Haider Ali (21) was next to go when he fell to an outstanding catch by debutant Jacques Snyman on the deep square-leg fence off Andile Phehlukwayo (2/33).

Although Haider’s effort proved to be the second highest score after Rizwan, the latter then almost single-handedly – he scored nearly two-thirds of their total – carried his side to 169 total with the away bowlers chipping away regularly at the other end.

Tabraiz Shamsi was the stand-out bowler with one for 20 in four overs.

Malan and Hendricks then provided the Proteas a strong start to the chase by putting on 53 for the opening wicket inside seven overs.

But after Usman Qadir (2/21) broke the stand, the hosts then turned the screw.

Snyman (2) and David Miller (6) fell without making any impact, before Heinrich Klaasen (12) upped the tempo again.

However, he picked out Hussain Talat on the fence off Haris Rauf (2/44) handing the initiative back to the home side.

And when Hendricks was sloppily run out, South Africa’s hopes all but evaporated.

Phehlukwayo (14), Dwaine Pretorius (15*) and Fortuin (17*) all tried to hit out late on. There were too many runs to get at that stage and Pakistan held on.