Proteas go down despite Markram century 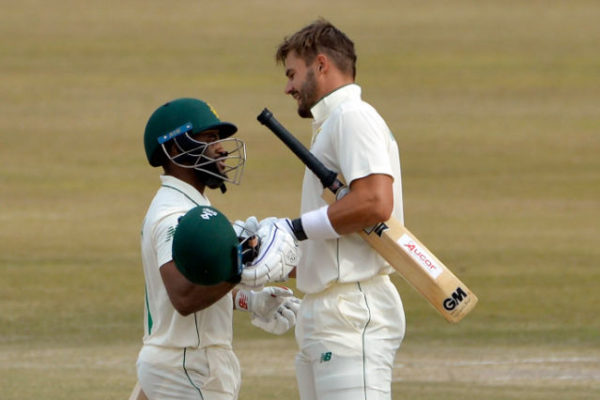 RAWALPINDI: Aiden Markram struck a valiant first Test century on foreign soil but it was not enough as the Proteas fell to a 95-run defeat to Pakistan midway through the final day of the second Test in Rawalpindi on Monday.

The right-hander finally showed why he is so highly regarded with a superb 108 (243 balls, 13 fours, 3 sixes), although a lack of support meant that South Africa were bowled out for 274 in pursuit of a tough fourth-innings target of 370.

Only Temba Bavuma (61 off 125 balls, 6 fours) offered any real backing as Mark Boucher’s side slipped from their promising position of 127 for one on day four to a defeat that saw them lose the series 2-0 – after thy lost the first Test by seven wickets in Karachi.

The chief destroyer for the hosts was fast bowler Hasan Ali as he followed his first-innings five for 54 with five for 60 second time around to finish the Test with a match-haul of 10 for 114. Fellow quick Shaheen Shah Afridi was also outstanding with a second innings haul of four for 51.

It was a tough defeat for the tourists, especially after displaying fighting spirit that was so bitterly craved.

Things could have gone so much better too had they not lost overnight batsman Rassie van der Dussen so early in the day for 48 – South Africa’s number three cleaned up third ball of the day by Hasan to end a battling 94-run stand.

They were also dealt another blow when former captain Faf du Plessis lasted only 13 deliveries before he was sent back to the pavilion by the same bowler, trapped leg before wicket for five.

The Proteas suddenly found themselves back at square one, under pressure on 135 for three.

Then came the partnership that raised the hopes of all South Africans when Markram and Bavuma got together for a 94-run fourth-wicket vigil that took the home side to within 129 of victory and with still six wickets standing.

Along the way Markram completed his fifth Test ton and highest score away from home, beating the 74 he made in the second innings in Karachi.

But that was as good as it got as the new ball then proved decisive. Pakistan needed just 11.4 overs to clean up the visitors’ line-up from the time they took it after 80 overs.

The centurion and Quinton de Kock (0) were dismissed from successive Hasan deliveries, with Bavuma following to Afridi just over five overs later, having completed a 15th career half-century a little earlier.

George Linde (4) was next to go when he was caught by Faheem Ashraf off Hasan at point, while Afridi’s took out Keshav Maharaj and Kagiso Rabada for ducks within three deliveries.

Wiaan Mulder was then last man out, bowled by Yasir Shah for 20, handing Pakistan the win.