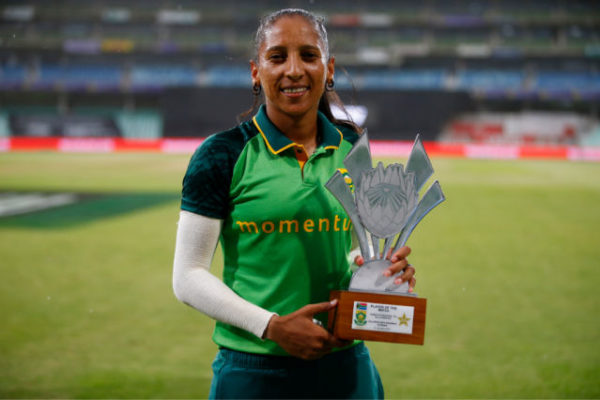 Cricket South Africa (CSA) has congratulated Momentum Proteas star Shabnim Ismail for being named as the inaugural winner of the International Cricket Council (ICC) Women’s Player of the Month for January.

The 32-year-old beat off competition from countrywoman Marizanne Kapp and Pakistan’s Diana Baig to clinch the first-ever award, which is voted for by fans by the ICC website.

Ismail played three One-Day Internationals and two Twenty20 internationals against Pakistan during the window period, claiming a total of 14 wickets as South Africa won both series in a bio-secure environment (BSE) held in Durban.

Amongst her outstanding performances was her career-best five for 12 in the second T20I. She also became the first Proteas player – male or female – to take 100 T20 international wickets.

“Shabnim has been a colossal performer for the Momentum Proteas over the years and I have no doubt she will go down as one of the legends of the game,” Head Coach Hilton Moreeng commented. “She continues to get stronger with each game for South Africa and I can see she is now really enjoying her cricket.

“Her performances in January is testament to her maturity. She is at the peak of her game and you could see how dangerous she was throughout the series against Pakistan.

“Her winning this ICC Award is fully deserved and will only serve to inspire others around her to follow in her footsteps in the months and years ahead. We are very proud of her.”

Ismail added: “I’m really happy and grateful to be voted as the best in the month of January. It just shows that hard work during the lockdown has really paid off for me.

“This accolade would never have been possible if it wasn’t for my team-mates so I’m grateful and thankful that they are on my side and we have a really good team.

“A message to all my fans and friends all around the world, thank you very much for the vote. It means a lot to me. And to my family, I really appreciate them being there and supporting me all the way.”