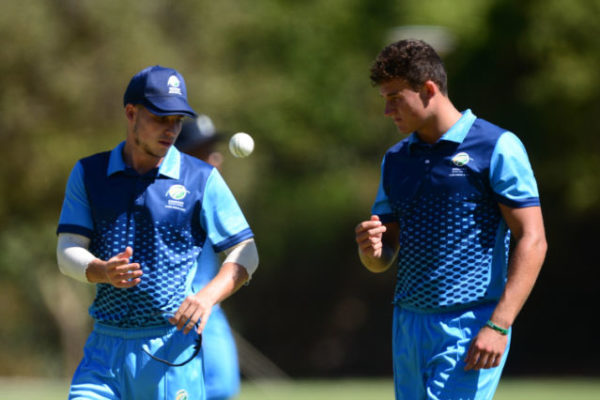 STELLENBOSCH: Jordan Hermann’s second century in three games helped the Momentum Multiply Titans bounce back from defeat with victory over the Hollywoodbets Dolphins on the third day of the Cricket South Africa (CSA) Under-19 Franchise Cubs Week in Stellenbosch on Friday.

However, it was the Six Gun Grill Cape Cobras that continued to dominate the 14th edition of the tournament after they made it three wins from three at the University of Stellenbosch, which is staging the event in a bio-secure environment (BSE).

Captain Hermann, who plundered 139 on day one, struck exactly 100* off 125 balls (6 fours, 1 six) as the Titans thumped the Dolphins by eight wickets at Tassies Oval.

Bowling first after winning the toss, the Centurion-based outfit bowled out their opponents for 196 in their 50 overs, with Hermann also the pick of the bowlers with two for seven. There were also two wickets for Nathan Steyn (2/29) and Christiaan Daniels (2/23).

Luc Benkenstein endured a rare low score with 26, but Colby Dyer did manage to shoulder the responsibility for the KwaZulu-Natal outfit with a vital 73 off 98 balls (3 fours, 3 sixes).

The all-rounder also claimed the only two wickets to fall in the Titans’ chase, but left-hander Hermann was in superb form once again – his three-figure score helping his side to their target in 44.4 overs.

Despite the win, the men from the Highveld are still chasing the Cobras at the summit of the table after they were made to work hard to beat the winless Warriors.

Batting first after winning the toss at the Maties C Field, the Eastern Cape franchise notched up one of the biggest totals of the week – a mighty 284 for five – thanks to another masterclass by their ever-reliable captain George van Heerden.

Finally, the Imperial Lions eased to a mammoth 125-run victory over the VKB Knights on the main Coetzenburg Oval field.

Caleb Saleka (3/7), the bowler with the best figures on the day, and Liam Alder (3/16) were the stars for their side by helping flatten the Central Franchise for just 87 in 26.4 overs.

This was in reply to a score of 202 for eight in which Hienrigh Pieterse top-scored with 45 and Nkhanyiso Mkhize hit 38. That total proved too big for the Knights as the Lions made it two wins from three.

Day four of the U19 Franchise Cubs Week continues on Saturday. To follow all the action live from Stellenbosch, visit www.pitchvision.com.