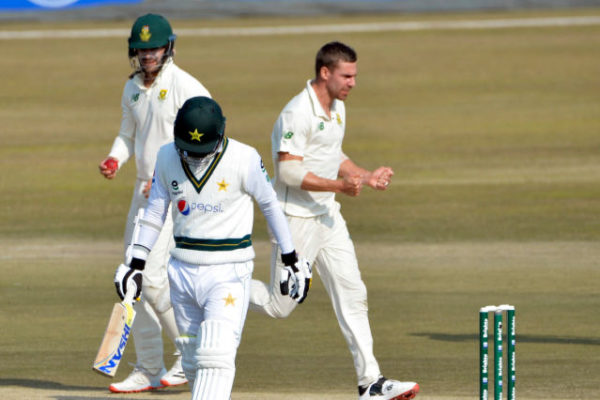 After rain allowed for only 58 overs to be sent down on day one, normal service resumed on day two as the visitors claimed the last seven wickets of the hosts for just 127 to leave them all out for 272.

Paceman Nortje was at the heart of that performance claiming five for 56.

However, the South Africans failed to find any fluidity in the reply as they went to stumps on 106 for four – still trailing by 166.

Aiden Markram was the top-scorer but fell for 32, while a later counter-attack by Quinton de Kock raised hope for his side as they chase a result that could help them square the series following defeat in the first Test at Karachi.

The day had started promisingly for the tourists with Nortje striking in the first over to remove the set Pakistani captain Babar Azam for 77 (127 balls, 12 fours), caught in slips by Faf du Plessis.

Four runs later and the other overnight man, Fawad Alam, was expertly run-out via a direct hit by Temba Bavuma for 45 – the tables suddenly turning on the home side.

Faheem Ashraf then proved to be the glue for the lower order as he recorded an unbeaten 78 off 160 balls (12 fours) as Nortje struck regularly around him to keep the total in check, before Shaheen Shah Afridi was last man out for a duck.

Keshav Maharaj finished with three for 90 in 45 overs and Pakistan were dismissed in 114.3 overs.

The Proteas’ reply began smoothly initially as Dean Elgar and Markram reached 26 without loss two deliveries before tea when the former edged Hasan Ali (2/29) to wicketkeeper Mohammad Rizwan for 15.

The same bowler then struck next ball by cleaning up Rassie van der Dussen for nought, shifting the momentum in favour of the hosts.

Markram and Du Plessis started out solidly after the interval as they looked to rebuild and their partnership ran smoothly until the former captain tried to cut an Ashraf delivery that was too close to his body and ended up edging to the keeper for 17.

From 55 for three, Bavuma and opener Markram added a further 26, but that stand was also ended, this time when Nauman Ali outfoxed the latter to put Pakistan well on top.

Current skipper De Kock then struck a flurry of boundaries to get his side across 100 but with plenty to do on day three.