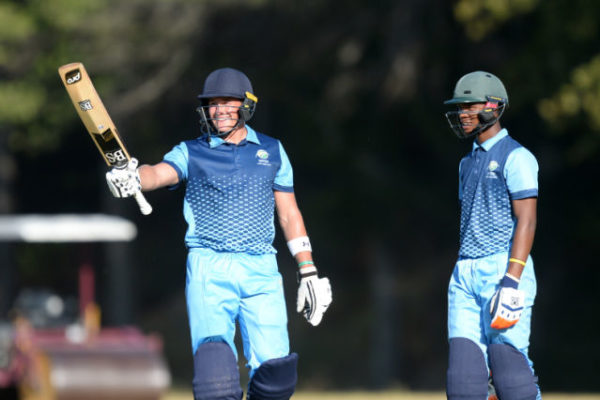 STELLENBOSCH: A stunning century by Hardus Coetzer nearly pulled off the impossible for the Momentum Multiply Titans but was ultimately not enough as the Six Gun Grill Cape Cobras made it two wins from two on the second day of the Cricket South Africa (CSA) Under-19 Franchise Cubs Week in Stellenbosch on Thursday.

The all-rounder, who earlier claimed two wickets, smashed five sixes and five fours in an unbeaten 102 off 95 balls, taking his side to within five runs of an unlikely 275-run chase before running out of partners.

He was one of two batsmen to strike tons in losing efforts – the second being Warriors captain George van Heerden, who hit exactly 100* (125 balls, 11 fours, 1 six) at the University of Stellenbosch, which is staging the tournament in a bio-secure environment (BSE).

The Eastern Cape franchise lost to the VKB Knights as they claimed their first win of the week together with the Hollywoodbets Dolphins at what is the 14th edition of the tournament.

The Cobras, though, were the big winners and they were set up via a strong total of 274 for seven at Tassies Oval.

Coetzer was the pick of the bowlers with two for 39, while Zeeshan Ismail collected two for 40.

The Titans’ reply was steady but went awry after they lost seven wickets with nearly 100 still to get – Michael Levitt proving to be the chief destroyer with four for 43 and Salmaan Ajam bagging three for 64.

But that was when Coetzer took over and single-handedly took the attack to the bowlers. He brought the equation right down to six runs from four balls, before perishing to Ajam and handing a thrilling win to the Cobras.

Elsewhere, Van Heerden fought a lone hand as the Warriors fell to a 49-run defeat to the Knights at the Coetzenburg Oval.

Batting first the Central Franchise posted 226 for eight thanks to 71 (78 balls, 8 fours) from GJ Maree and Lerato Nqoyi’s 44.

Mvula Chabalala then claimed three for 38 and Reeza Alexander took two for 28 to leave their opponents all out for 177 in 42.3 overs.

The skipper was the only man the Knights failed to dislodge as he followed his opening day half-century with another fine display, albeit in defeat.

Like the Bloemfontein-based side, the Dolphins too secured a first win of the week by beating the Imperial Lions.

The KwaZulu-Natal outfit won the toss and posted 241 for eight at Maties D Field, a total that was built around 60 (105 balls, 3 fours, 2 sixes) by the captain Luc Benkenstein.

Extras was the next highest scorer with 34, while Caleb Seleka grabbed three for 21.

Benkenstein also starred with the ball by taking two for 37, and together with Colby Dyer’s three for 31, they restricted the Lions to just 190 in 38.1 overs to seal a 51-run triumph.

Day three of the U19 Franchise Cubs Week continues on Friday. To follow all the action live from Stellenbosch, visit www.pitchvision.com.