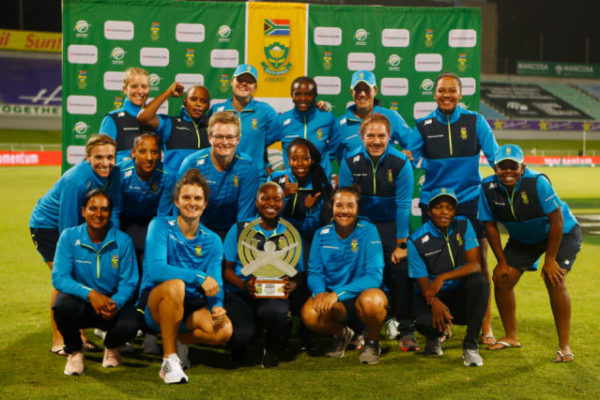 The three-match sequence concluded on Wednesday with the visitors winning the final match by eight runs on the Duckworth/Lewis Method – their first win of the tour.

South Africa took an unassailable 2-0 lead in the series after winning the first two matches by eight wickets and 18 runs respectively.

All the matches during the series were played at Hollywoodbets Kingsmead Stadium with both teams playing within a bio-secure environment (BSE) in Durban.

“CSA would like to congratulate the Momentum Proteas for yet another series win, commented CSA Director of Cricket Graeme Smith. “They once again displayed the quality they have by playing outstanding cricket throughout the T20 series.

“We saw some excellent performances from several players in the group and I would like to commend all of them for their efforts. A special mention must also be made of Shabnim Ismail, who became the first Protea – male or female – to reach 100 T20 International wickets.”

Hilton Moreeng’s charges also won the One-Day International leg of the tour with a 3-0 whitewash of the tourists.

“All in all we are very proud of head coach Hilton and his team,” Smith added. “The women’s game is continuing to make great strides and this is really exciting for all South Africans.

“Finally I must also thank the Pakistan Cricket Board (PCB) for undertaking the trip to our country during these difficult times. As we have seen with Covid-19, the sporting landscape has changed dramatically and we feel honoured to have hosted them during an incident-free tour.”